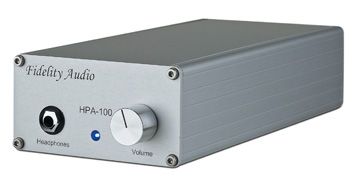 Give the HPA-100 plenty of time to run-in, and you’ll have one of the finest headphone amplifiers anywhere near this price

This simple, no-nonsense unit sounds so much better after a few days’ use. Straight from the box, its performance is perfectly decent – but there’s nothing that suggests true greatness.

But after a few hours, its solid, three dimensional presentation starts becoming apparent – and as time goes on the sound becomes even more expressive, and detail levels step up a couple of notches.

Once properly run-in, the HPA-100 is a terrific performer. It’s a little understated in delivery, but listen carefully and its talents become clear. Its sound is unusually composed, conveying bass weight and authority very well.

Smooth, balanced and unexaggerated
Some rivals emphasise high frequencies in a bid to sound detailed. Not this one. It’s smooth and balanced, preferring to deliver details in an unexaggerated manner rather than trying to highlight them to impress.

Don’t think for one minute that the HPA-100 isn’t an exciting listen. With music as wide ranging as Tchaikovsky’s 1812 Overture and Major Lazer’s Pon de Floor, the Fidelity manages to deliver sound full of clarity, expressive dynamics and rock-solid timing. That’s a neat trick that few rivals at this price can match.

Move onto other areas and the HPA-100 remains on firm ground. It’s built very well and feels solid in use. Features cover the basics: there’s a 6.3mm jack, a single line-level input and a partnering output. Limited, but acceptable.

Overall this is a very fine product. Just don’t rush to your final judgement until it has had some time to cook.

See all our headphone amp reviews