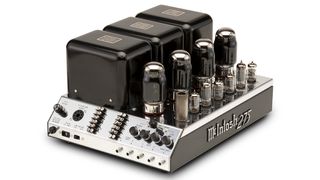 The dictionary definition of ‘legendary’ is of something that is 'famous and admired or spoken about' – and we think all the products in this list tick that box. We’ve travelled back through time to bring you some of the most iconic kit in hi-fi history, legendary products that still resonate today. During their time, the hi-fi equipment here not only set the standards but also raised the bar for products to come.

Ironically, the big multinational companies with unlimited resources aren’t usually the ones creating legendary products. They tend to come from smaller teams or individuals with a vision to create something special and unique. There's a range of hi-fi kit here, including amplifiers, speakers and turntables, but all of them left a lasting impression, whose impact can still be felt and heard to this very day.

So join us on a guided tour of some of the most iconic products in hi-fi history.

Say hello to amplifier royalty. In fact, given this machine’s standing in hi-fi folklore, you should probably bow (or curtsy). The Ongaku was a valve amplifier, designed by Hiroyasu Kondo, founder of Audio Note Japan. It was a device of simplicity and beauty. Each amplifier was hand made and employed the highly-regarded 211 valve tubes.

Silver was used extensively throughout the design, including in the hand-wound transistors, capacitors and wiring, to help maximise sound quality. The Ongaku might have only mustered 27W per channel, but what it lacked in grunt it made up for with an amazing sound, full of richness and musicality. Simply stunning.

While many amplifier manufacturers were busy making the switch from valves to transistors in the 1970s and 80s, Audio Research held firm. Had they followed the trend, we probably wouldn't be writing about the truly fantastic SP10 valve preamp. This two-box behemoth saw the preamp partnered with its own external power supply, the SP-10PS. The duo used no fewer than 15 valves in total (12 in the preamp and three in the power supply).

The design was typical Audio Research; clean-cut yet purposeful with the preamp presenting dials that could control everything from gain to cartridge loading. It's an iconic design that delivered a wonderfully precise and rich sound, overflowing with natural warmth.

Hi-fi speaker or a work of art? The iconic B&W Nautilus speakers have sent many an audiophile’s pulse racing – few floorstanders have the same presence. Their unique shape stems from B&W wanting to create a speaker to reduce the effects of cabinet colouration on sound quality. B&W eventually settled on a reverse-horn arrangement that delivered all the benefits of an open cabinet design with none of the drawbacks.

These Nautilus tubes (tech that has trickled down to a number of high-end B&W speakers) are attached to the four individual drivers – their length depends on the amount of energy they have to absorb. The bass tube is 4m long, which gives the speaker its distinctive swirl.

There aren’t many brands with the same high-end cachet as Burmester and this list wouldn’t be complete without doffing our caps to one of the finest preamps in high-end history. From the solid casework to the heavy clunk of its volume controls, it looks and feels the part. The 808 Mk5 preamp is an iconic product that was built to last decades, so it’s no surprise the preamp remains current, even now. Burmester’s team of engineers has evolved it, helped by the fact that the preamp uses interchangeable modules which can plug straight into the 808’s main circuit board

This arrangement gives the Burmester a fantastic amount of flexibility – if you happen to own three turntables, you can have three individually tailored phono stage modules built for it. It sounds sensational too, displaying composure that’s rare to find, even in high-end products.

The KSA50 power amp, together with its stablemate, the KSA100, established Krell as a major force in hi-fi. Not only was it a modern-looking power amp by mid-1980s standards, but it also created the template to follow. The KSA50 had 50W per channel, but this could rise to 100W into 4 ohms, meaning it could drive even the most stubborn of speakers, and still have enough in the tank to power a small city.

The sheer sense of drive and amount of muscle on display meant the Class-A design could cope with any speaker you cared to partner it with. It delivered hefty bass and produced a stereo image to die for. Not only was the arrival of such a capable power amplifier like the KSA50 great news for audiophiles, but it was also great news for manufacturers of high-end loudspeakers. Designers could concentrate on creating speakers safe in the knowledge they didn’t have to worry as much about the load they were putting on amps.

As far as debut products go, the Linn Sondek LP12 turntable isn’t a bad one. Introduced by Linn founder, Ivor Tiefenbrun, the Sondek LP12 was the dominant deck in the UK for decades and is still among the best high-end turntables money can buy. It was designed with one purpose: to retrieve as much information from a record as possible. Tiefenbrun wanted it to be immune from acoustic feedback, so he set about isolating the deck and creating a special low-friction central bearing.

The LP12 was loved by reviewers and owners alike and the forward-thinking modular design gave it a versatility that has allowed it to develop into the stunning record player that we know and still love today.

This was one of the first CD players to hit the market with a proper high-end price tag. We say player, but it is in fact a two-box set-up that elevated CD playback to a whole new level. It combined Mark Levinson’s No.30 Reference Digital processor (DAC/preamp) with the matching Reference CD Transport, showing off the brand’s luxurious high-end engineering to a tee.

It showed how serious the brand was about achieving the best sound quality with no real limitations on price. Separating the two sections helped reduce unwanted electrical interference, resulting in a performance hike that, until 1991, had been unheard of in a product of this type.

If you’re looking for an iconic stereo vacuum tube power amp, look no further. The MC275 (so-called because power is rated at 2x 75W per channel) is one of McIntosh’s most popular products of all time and sold in its thousands during its first stint in production between 1961 and 1972. It was brought back in 1994 to commemorate former McIntosh president Gordon J Gow and we’ve seen a handful of new iterations since then.

The MC275 was way ahead of its time, employing state-of-the-art technology such as McIntosh’s ‘unity coupled’ output transformer, an ingenious design that removed the effects of any switching transients. More recent incarnations have remained faithful to the original, with only slight design tweaks to replace obsolete parts and meet modern safety requirements. Put simply, the MC275 still holds its own against any rival you’ll find on the market today.

Nagra was founded in 1951, but it wasn’t until 1998 that the Swiss brand launched its first hi-fi product, the PL-P preamplifier. It borrowed heavily on the technology from the company’s cutting-edge recorders, used in the film, broadcasting and security industries, and was unlike anything the high-end establishment had seen before.

The PL-P included built-in batteries, an innovative feature that allowed a clean and steady power supply into the preamp and kept it isolated from any mains noise. Nagra deemed this preamp good enough to stay in production until 2012 and even though it’s over two decades old, this clever box of tricks still outperforms many modern-day equivalents.

Ask Naim which product was the most important in its history, we’d put money on it pointing at the NAP250. It’s not the flashiest product the British brand has created, nor the most technically advanced, but legendary hi-fi doesn’t need to be. The circuitry and the way it was implemented, together with its regulated power supply set a template for Naim’s fast, agile and dynamic sound.

It has been tweaked over time, to update aged components and bring it in line with the company’s modern aesthetic, but Naim isn’t one for making unnecessary changes. The NAP250 still sounds as sensational now as it did back in 1975.

Has any piece of hi-fi ever sounded as mythical or mystical as the Nakamichi Dragon? This cassette player helped elevate the tape (which wasn’t the greatest medium) to audiophile status. It was packed full of engineering brilliance and included bi-directional playback, plus a clever automatic azimuth correction system that ensured the tape head made perfect contact with the tape. The result was more accurate playback across all frequencies.

Ironically, this player wasn’t the best-sounding or the most expensive tape deck in Nakamichi’s line-up, but it’s arguably the most memorable and the one that audiophiles would love to get their hands on.

While the Linn LP 12 was making waves in the UK, Canadian firm Oracle set about putting its own spin on a flagship record player. The Delphi Mk1 looked the part and, like the Linn, was a fantastic and fascinating piece of hi-fi engineering. Surprisingly, Oracle didn't use a two-piece platter for the Delphi’s design. Instead, the belt ran on a rim located underneath the platter, making it fiddly to change speed manually.

Its sub-chassis was suspended by a three-point mount on stretched springs to stop unwanted vibrations and, to help eliminate horizontal movement of the suspended platter, its centre of gravity was moved to the same height as the suspension fixings. It also featured a screw-down clamp to pin the record firmly to the mat. A luxurious-looking turntable that’s now into its sixth generation.

Revolutionary new speaker technology doesn’t come along often, which makes the exploits of Quad founder Peter Walker, and his brainchild, the ESL 57 all the more significant. The ESL 57, born in 1957, saw electrostatic technology used in a loudspeaker for the first time instead of conventional drivers. In their place, Walker put a thinly-stretched, electrically-charged diaphragm between two metal grilles receiving the music signal from the amplifier. The positives of an electrostatic design meant any potential for cabinet colouration was removed.

This world-first preceded a range of brand-defining electrostatics and such was the significance and popularity of the ESL 57, the speaker ended up being in production for nearly 30 years. You can enjoy Quad's more recent electrostatic efforts on shop floors today, although many still class the original ESL 57 as the best.

If we’re talking about classic loudspeakers, they don’t come much bigger, literally, than the original Tannoy Westminster. All the best versions of the technology we’ve come to know and love in Tannoy’s more affordable speakers over the years are presented here in a no-compromise form. The Westminster combines a horn design, with a 38cm version of the brand’s trademark dual concentric driver. The only things you need are suitable partner electronics and a room large enough to fit them in.

Their impressive dimensions (they're 130cm tall) indicated that the Tannoys were all about scale and size of sound, but while the Westminsters could certainly deliver all of this, they were also capable of wonderful subtlety, delicacy and an exceptional sense of musicality.

The story behind… Rega Naiad