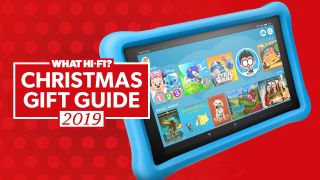 You could get your kids some duff presents this year, but you'd be known as the parent who ruined Christmas. And do you really want that hanging over you for the rest of the year?

Of course you don't. But pick one of these great gifts, and you'll win the day.

We've got everything from headphones, tablets, DIY coding robots and even a telly to keep them quiet. And they're all top quality, not to mention - relatively - affordable.

It's your ticket to a peaceful Christmas. And hopefully, a peaceful rest of year...

Essentially this is the very good Fire HD 8 tablet with a super-protective, rubberised case, a two-year warranty and a year's subscription to Amazon's Fire for Kids service. That makes it the perfect present for even the clumsiest and most demanding of children.

The Fire for Kids service is the real parent-pleaser here, as it gives the whole device a kid-friendly overlay and gives access to only age-appropriate apps and content - which you can manually add to if you wish. The 12-hour battery life guarantees plenty of quiet time, too.

The Skullcandy Smokin' Buds 2 Wireless cost just £35, and if you shop around you can find them for under £30, which is an absolute steal.

Why? Because they deliver solid wireless performance, and have a removable neck band which the little ones can take off if they don't like. Thanks to the plastic fastener, the headphones can be tied together when not in use, which will stop them getting tangled. And they don't sound half bad either. A great stocking filler.

Sky gives you access to loads of exclusive content for kids, but you don't want an expensive subscription just for that. Instead, buy the £15 Now TV Smart Stick and add a £3.99 per month Kids Pass.

The Now TV Smart Stick plugs directly into the HDMI socket of any TV and is a doddle to use, while the Kids Pass gives access to nearly a dozen channels of children-focused entertainment, including the likes of Morph, My Little Pony, SpongeBob Squarepants, Adventure Time, Sylvester & Tweety Mysteries and much more. That should keep the little ones occupied right up to the New Year and beyond.

You don't want to spend a fortune on a pair of headphones if they're not going to be looked after. And that's where the AKG Y50 come in. Originally launched at over £100, they're now pretty much £50 across the board. They sound so good that we've given them multiple Awards, they're wired, look very cool, and are available in a range of colours. There's a lot to like here, and we're sure your kids will agree.

Listen to it in the garden, hang it from a hook in a tent, plonk it next to the pool – the UE Wonderboom can endure all kinds of knocks and splashes so it should survive Christmas day and beyond.

The funky design and punchy sound make this a fun portable Bluetooth speaker that's tough to destroy (that’s not a challenge).

Face it; it's about time your kids had a bedroom TV - if for no other reason than to get their gaming out of the lounge so you can prioritise your own entertainment.

Now kids are no fools. They know a duff TV when they see one. Thankfully this 43-inch Samsung set is a brilliant TV for the money. Not only is the UE43RU7470 reasonably priced, it also packs 4K and HDR tech for stunning visuals, probably the best user interface around, and delivers a detailed, colourful picture. In fact, it's so good, you might end up moving it into your own bedroom.

Christmas is the perfect time to get your kids into vinyl and maybe upgrade your turntable at the same time. And this budget Sony deck could be the perfect present.

The PS-LX310BT is the perfect marriage of classic and modern. It runs straight out of the box with minimal set up thanks to its built-in phono stage, so it won't take most of Christmas morning to get going. And the BT in the name stands for Bluetooth, so you can beam tunes from the deck to a pair of wireless headphones or a speaker.

Too soon to give your kid a fully-fledged smartphone but looking for something to play music, games and videos on? The latest Apple iPod Touch is a good compromise – it’s slick, works just like an iPhone (it's even got a camera) and, most importantly, can store thousands of songs that your kid can carry around in their pocket.

You can't go wrong with the Toy Story films, for kids and adults alike. This instalment sees Woody and the gang try to rescue a new toy called Forky (who's basically just a spork). It's more emotionally subtle than the previous installments, but just as funny.

Shell out for the 4K Blu-ray and you'll get an extra disc packed full of extras. And if you really want to settle in, you could opt for the Toy Story quadrilogy pack. Well, sure beats whatever's on telly over Christmas.

Star Wars fan? Inspire your child’s inner inventor with this R2-D2 that can be programmed to do loads of different actions by connecting a variety of chips together: make the droid light up, make noises, move around, and even use The Force to control it (sort of).

For ages eight and above, it's a great way to get into coding and engineering. Educational and fun.

Who doesn't love computer games at Christmas? Now you can relive your youth and put a smile on the kids' faces with this retro Sega games console. There are over 40 classic games to get through, including Sonic the Hedgehog, Castlevania and ToeJam and Earl. The Mega Drive Mini comes with two controllers and it simply connects to your TV via HDMI. Have fun!