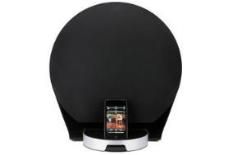 Looks good but sadly sounds rather average for the outlay demanded

Allow us to edify you with some background knowledge about the company behind this upstanding iPod system.

Founded in Beijing in 1996, it's fair to say Edifier has done alright for itself, claiming to be number one in China in terms of output and sales.

We saw a multimedia speaker from the company in February 2009, and now it's the turn of the iF500 speaker dock. Not just packing five drivers, this system has an FM tuner and auxiliary input to accompany the iPod dock.

The style is tall and fairly obtrusive, but our collective opinion on the overall appearance was fairly positive. Certainly in terms of build and finish, right down to the remote control, the iF500 scores well.

Plenty of boom in the bass
As you might expect from a dock of this substantial size, the iF500 is capable of delivering a hefty dose of bass. Listening to 2562's Moog Dub, the 320kbps MP3 has plenty of weight and power to stretch the iF500, and it responds well where smaller docks would struggle.

As a consequence drums don't hit with the crispness and punch and that they should, the resultant sonic softening having a negative effect on dynamics and overall excitement.

Get close to control
It's a shame the iF500's display isn't visible from a sitting position, though get up close and the touch-sensitive buttons on the unit are responsive.

This means switching between audio modes and scanning frequencies on the decent-enough FM tuner is simple… if you're looking at the iF500 from above, that is.

Sonically this is no disgrace but models half the price will give it a run for its money, and that's why we can only muster a certain level of enthusiasm.