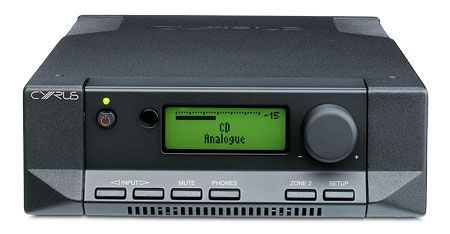 Along with meticulous attention to detail and rhythm, the Cyrus also offers a spacious and engaging sound

Cyrus has been knocking down the prices across its 6 and 8 ranges, and the new Cyrus 8 DAC follows suit by being a hundred quid cheaper than its predecessor, the Cyrus 8XPd.

The name of the product is a little misleading, though. It’s not a standalone DAC as the name suggests – it’s an integrated amp with a built-in DAC.

The 8 DAC is everything that you would want from a Cyrus: clear and precise. Play Oasis’ Wonderwall from a CD and Liam’s signature vocals are delivered with great clarity alongside the jangling guitars.

It has impeccable timing and works with ruthless efficiency, determined to deliver every ounce of detail from a recording.

No note is allowed to wander free, and dynamics are controlled brilliantly. There’s also a muscular quality to the sound that adds authority at either end of the frequency range.

To put the Cyrus to the test, we streamed a 1411kbps file of the Jurassic Park OST from a laptop. The 8 DAC is more than adept at handling the complex arrangements: instruments are separate and identifiable, and sit nicely in an open, spacious soundstage.

While it’s unfussy about music styles, its transparent clarity means that flaws in lower-resolution recordings will show up. We’d also suggest taking some care with partnering equipment such as racks, as different surfaces really can affect sound.

As with the new Cyrus 6a we reviewed in our May issue, the main change here is an update to the power-supply capacitors.

Cosmetically, though, it has remained unchanged. The familiar (and very sturdy) aluminium box comes finished in quartz silver or brushed black, and the front

to read from a distance.

At the back you’ll find five digital inputs, including USB for computer connections.

Cyrus also provides the option to upgrade the 8 DAC to a higher-spec DAC – but such is this unit’s facility with material of all types, we think it’ll be a good long while before you go down that road.