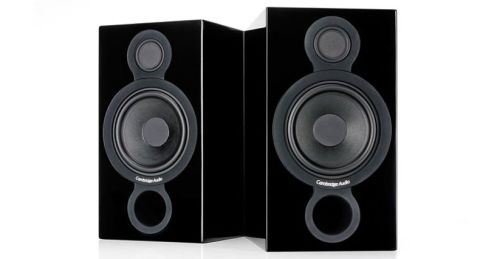 If you think these are yet another pair of conventional two-way stand-mounters, think again. There’s more going on here than meets the eye.

That small driver isn’t a tweeter, but a 46mm BMR (Balanced Mode Radiator). BMRs cover a much wider frequency range than conventional alternatives. In the case of the Aeromax 2, that’s everything from the highest treble right down to 250Hz.

At this point, the sound is passed on to what is more a dedicated bass driver rather than a traditional mid/bass unit. Conventional speakers tend to have the handover between the mid/bass and tweeter between 2-3kHz. This puts the crossover point smack in the middle of where vocals tend to be, and it’s exactly the region our hearing is at its most sensitive.

Crossovers invariably introduce all sorts of phase issues and result in a loss of detail. Any way of moving this handover to a frequency where our hearing is less sensitive is a good thing – 250Hz is far preferable to 2.5kHz in this case.

A BMR driver makes this possible. The unit used in the Aeromax 2 is a fourth-generation design and is claimed to have a smoother, more even response at higher frequencies than earlier versions. It’s mated to a 16.5cm bass driver and linked through a carefully calibrated crossover.

Build quality is good. The cabinet is solid thanks to heavy bracing, and smartly finished with it. Colour options are limited to gloss black or white.

These speakers aren’t particularly fussy about positioning. We like them best a little into the room, but the combination of taut bass performance and front-firing port means that they sound comfortable closer to a rear wall than most rivals.

In addition, the excellent dispersion of BMR drivers means that it isn’t necessary to play around with toe-in a great deal to get a good stereo image. These speakers are quite happy firing straight ahead, delivering a stable, well defined and precise soundstage while doing so.

Feed the Aeromax 2s a hard-charging track such as Bruce Springsteen’s Radio Nowhere and they sound right at home. There’s plenty of punch, particularly in the bass, where they pound out the low notes with real authority.

They sound confident and composed too; elements stay organised when things get complicated. There’s a wonderful directness with vocals – we’ve noticed similar traits with other good speakers that have used BMRs. The midrange is well projected and solid. Compare those with more conventional alternatives, and even the best of them – such as B&W’s 685 S2s – sound a little indistinct and soft with voices.

You can add a fairly even tonal balance and the ability to play loudly to the list of plus points too. The Aeromax 2s sound far bigger than they are, and deliver a pleasing sense of scale when the music demands.

Things aren’t perfect though. These Cambridges aren’t particularly subtle-sounding. They deliver a decent amount of detail but they never seem to render low-level dynamics with much conviction; the way a great artist such as Nina Simone uses her voice isn’t communicated as well as it could be.

Nuances are flattened and, in the process, some of the emotional engagement is lost. The way the stand-mounters latch on to a rhythm track is pretty good, but they could do it with a bit more enthusiasm. Fast-moving tunes such as Michael Jackson’s Wanna Be Startin’ Somethin’ sound a little laboured, lacking their usual dose of energy and momentum.

Despite our criticisms, we like the Aeromax 2s. Using a single driver across treble and midrange has clear benefits, and few rivals sound as confident and large scale. We don’t think the 2s are far from challenging the best at this price.

They just need just a little more development to help them get there. How about it Cambridge?