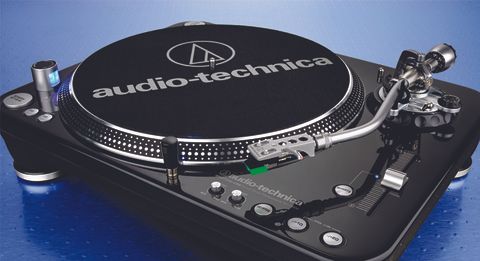 More than capable with sound, but better with features

Wow, this is a flashy effort from Audio Technica. While rivals from Pro-Ject and Rega have gone for simplicity, this one goes in all guns blazing.

That’s because of all the added DJ features. Indeed, this bears an uncanny resemblance to the legendary Technics SL-1210 turntables. Turn away now if you’re after a straight-up audiophile product: this is not it.

There’s quite a lot going on here. First, the conventional. It’s a direct-drive design with an aluminium platter and electronic speed change (33⅓, 45, 78rpm).

The headshell is removable, which is just as well as no cartridge is included. You can get a decent one for about £30: we went for the Audio Technica AT95E/BL.

Now it gets a bit fancier. A stroboscope indicates speed accuracy, while also creating a disco vibe. A removable ‘stylus target light’ lets you put the needle in the groove in the dark. Next to this are dials for start and brake speed adjustments.

For DJs wanting to lay their decks in ‘battle’ configuration, there are two start/stop buttons. There’s a slider to adjust pitch, and a quartz lock button to bypass that slider.

Oh, and unless you’re a DJ, never hit the ‘reverse’ button – otherwise you’ll ruin both stylus and record. You can also adjust the height of the tonearm, as well as the turntable’s feet, which offer a bit of isolation from external vibration.

Build quality is very strong, for the most part, although we note a degree of excess movement in the tonearm bearings.

There’s a USB output for recording on your PC/Mac computer (with the bundled Audacity software), plus a built-in phono amp.

The latter is fine, but when we plugged in a Rega Fono Mini A2D the sound was a lot more dynamic, punchy, detailed and subtle.

With the Rega phono amp connected, it’s time to see how Bad Michael Jackson really is. It’s a decent performance, with a nice sense of drive.

There’s a good deal of clarity too, with various elements nicely separated and clearly identifiable. Over to Tom Waits's Closing Time, and guitar pluckings are convincing.

However, the Audio Technica could do with more subtlety, and more nuance in the leading and trailing edges of notes.

The deck is very good at taking apart the various elements of a track, but less competent at then presenting them as a cohesive, musical whole.

Having said that, we’re more than happy with the sense of energy on hand.

Make no mistake, this is a very competent turntable. If you want one with all the trimmings, it could be just the ticket.

But if you’re after outright sound quality, we’d advise something a little less showy.