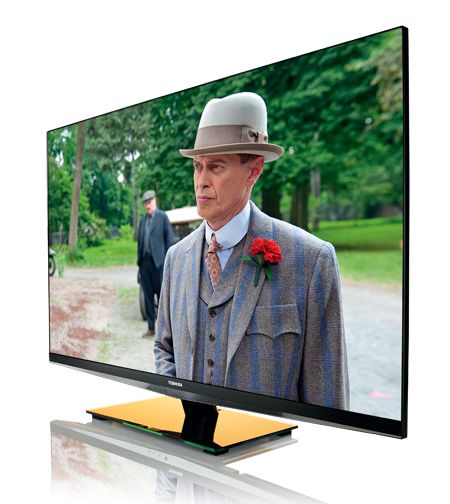 A decent screen that packs a lot of nice features – tough competition, though

As soon as we turned it on, the Toshiba 42VL963 started faring better than its sibiling the 40TL963, which had LED backlight issues. Admittedly, there are some patches of unevenness, but they are less persistent in this set and it doesn’t interfere with the picture on the screen.

This TV has both Freesat and Freeview HD tuners. A standard-definition episode of How I Met Your Mother is good to watch, with Freesat channel delivering crisper images than Freeview, as usual.

Toshiba 42VL963: Picture quality
Switch to Star Trek on Blu-ray, and there’s a good level of detail delivered, alongside clean images and stable motion. Contrast is yet again the weakest factor in this set – black levels just aren’t deep enough, leaving whites and highlights to look decidedly muted and glum.

The edges of the grand USS Enterprise, against the backdrop of deep space and bright pinpoints of stars and lens flares, are not rendered with as much punch and clarity – which makes watching the film less exciting.

Play Hugo in 3D and you’ll find the Toshiba’s smooth motion-handling working to full effect, with minimal flicker to distract you from the film.

Toshiba 42VL963: 3D peformance
The 3D is passive, so as is usually the way it’s more comfortable for longer viewing sessions compared with an active set. Toshiba has included four pairs of lightweight glasses so you don’t have watch 3D films all on your own.

DVD upscaling remains its redeeming feature, with Leon displayed with minimal noise, and once again scenes in natural sunlight have much better colour balance and warmth.

On its own, this TV is nice to watch, but it falls short in terms of outright clarity and subtlety when compared with the Samsung UE40ES8000 and Sony KDL-40HX853.

A more direct rival to the 42VL963 in terms of price, passive 3D capabilities and their leanness of picture colour would be the LG 42LM660T.

While both sets are relatively on a par, if we were forced to pick we’d choose the LG thanks to its intuitive and friendly interface.

It’s interesting to play around with all these options, but we’d recommend turning pretty much all of them off. With them on, they keep trying to adjust the picture on the screen and the constant adjustment is distracting.

Toshiba 42VL963: Sound quality
We’d also suggest pairing the TV with an amp and decent speakers or a soundbar, as the thin-sounding Toshiba has a sibilant edge that can be grating.

Smart features are abundant in the Toshiba Places smart hub. There are various online services like BBCiPlayer and Acetrax providing on-demand music and video content, while social networking services like Facebook, Twitter and email make sure you’re never disconnected from the outside world.

There’s both wired and wireless connectivity on board, which means you can stream any multimedia you have stored on your computer, NAS device or even smartphone straight to your TV.

Toshiba 42VL963: VerdictThe Toshiba 42VL963 may not yet be leading the pack in terms of performance, but it’s a good set at a reasonable price with plenty of attractive features – and as such, it’s well worth a place on your shortlist.