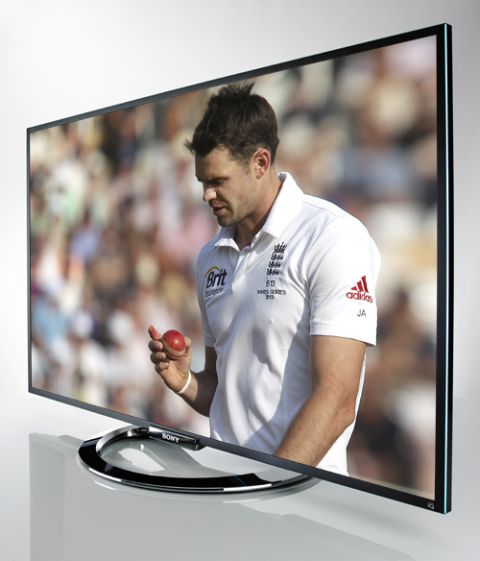 Stacks of detail and a stunning 3D performance, but pictures lack the punch of a five-star product, and we’d like to see brighter whites too

The Sony KDL-46W905A is bound to be popular. Part of the flagship Sony W9 TV range, this 46in is nearly £1000 cheaper and a much more manageable size than the 55in we reviewed first. But will this set suffer from the issues we noted in the larger model?

It’s been a few months now since we saw the top-end 55in model of Sony’s flagship W9 range, the Sony KDL-55W905A. While there was plenty to like from the new look Sony TV, we also found enough to grumble about that meant it fell short of our top five-star grade.

Design-wise, the Sony KDL-46W905A is a carbon copy of its bigger brother, with the same silver circular stand and the flash of blue along the top bezel edge that represents Sony’s 2013 ‘Sense of Quartz’ design language. There’s certainly no argument that this is a stunning set, though it sits quite low – something worth considering if you’re a soundbar owner.

Of course, performance is really what counts, so we kick off with a Blu-ray of Sucker Punch to see how the Sony 46 inch W9 fares. The gloomy opening scene is portrayed with stacks of crisp detail and sharp, precise lines.

The black levels are impressive, and we’re pleased to report that the viewing angle issues that we found with the 55in version don’t seem to affect the 46in version in the same way.

That said, we found the Sony KDL-46W905A lacked the picture punch that we’ve seen on other sets at this level. Whites are held back from true brightness and faces can appear somewhat drawn, rather than filled with natural colour.

Some of the green-tinged gloomy scenes of the comic book-styled Sucker Punch even appeared to be in black and white, and we couldn’t find a setting change that helps without causing colours to become overblown or making sacrifices to the picture elsewhere.

Watching Frozen Planet on the built-in Freeview HD tuner, the vast panning landscape shots show the Sony’s great handling of motion. The W9 TV offers up stacks of subtle detail and picks out plenty of texture in the wolves’ fur and trees in the process.

The feeling of depth isn’t dealt with as well as other sets we’ve seen, though, and contrast performance could again be better.

We switch over to DVD and the quality of the 46W905A’s upscaler is immediately clear. Blacks are inky black, shadow detail is impressive and edges are defined, making the Star Wars: Return of the Jedi DVD look like the HD remastered version.

It’s one of the best upscaling performances we’ve seen this year, and will certainly refresh any tired-looking DVD collection.

Finally we take a look at 3D. Like the 55in version, the 46W905A is an active 3D set and comes with four pairs of glasses in the box. While we tend to prefer passive 3D for comfort, there’s no denying the increased sense of depth and space that active brings to the table, and this Sony W9 demonstrates this superbly.

With very little crosstalk or judder of note, we were left to enjoy a vibrant, crisp and stable 3D performance that’s among the best we’ve seen.

The set enjoys Sony’s familiar suite of smart abilities, and sound is dealt with in the same way as its big brother: there’s a 1.2m-long speaker duct on the back of the TV and downward-firing, forward-projecting speakers that promise a more open sound and deeper bass.

The results are better than previous years, but we’d still suggest investing in a good 5.1 speaker system or even a soundbar to improve things further.

Overall the Sony KDL-46W905A is a very capable TV, which seems to fix some issues we noticed in the 55in version, but adopts a few of its own in the process. We love the layer upon layer of detail it shows, but the picture lacks the punch and natural vibrancy we’ve seen elsewhere, not to mention a white level performance that leaves us wanting a little bit more.

The 46in W9 is good set in many ways, but it ultimately falls short of being a great one when compared with rivals at the top of their game, like the Panasonic TX-L47DT65B. Once again for the Sony 2013 TV range this year, it’s a case of close but no cigar.