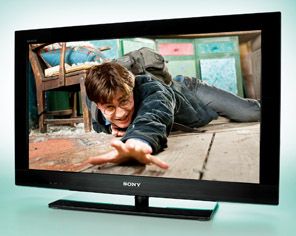 Good but not great, this Sony’s picture lacks sparkle compared with the best

It tends to be a cyclical affair at the head of the AV-tech leaderboard.

One manufacturer will go the extra mile in terms of performance, be first with the latest feature or simply slip out a product with a market-beating price, in order to take the crown.

A royal flush of internet content
As is the case with some other manufacturers in this price and size range, the only thing missing is support for 3D.

As is almost de rigeur now, it sports an LED backlight – an edge-lit one in this case. It’s a full HD set and comes ready to connect you to Sony’s world of internet TV.

The company’s Bravia Internet Video is one of the better services around, not only sporting the almost ubiquitous BBC iPlayer, YouTube and so on, but also coming with Skype and the company’s Qriocity service.

As you’re probably aware, Sony has suffered security breaches that affected its PlayStation Network and the Qriocity service, with both suspended at the time of writing.

Qriocity streaming impresses
Once it gets ironed out, though, you’re in for a treat: Qriocity offers music via subscription and SD and HD video content for one-off fees, all streaming directly to your TV.

It’s a formidable addition to Sony’s AV arsenal, not least as the selection and quality of content – when it’s available – is brilliant. Accessing features such as Qriocity is done via a fresh take on the Xross Media Bar.

No longer does the interface take over the whole screen – instead, there’s plenty of the live picture on show, while menus run along the bottom and right-hand side of the display.

The remote is the same, but looks good, and while a fair size is neatly put together.

Pictures can look lacklustre
The most striking aspect of the picture is, conversely, how lacklustre it is. And no amount of tweaking can pep-up the EX524’s drab, understated palette.

At times it works nicely, with Harry Potter and the Deathly Hallows: Part 1 looking natural and subtle in brighter scenes. But if the setting is darker, the Sony can get really gloomy: turn the brightness up and the otherwise solid black levels appear drained of colour.

The Monsters Blu-ray shows a rich, refined picture, but bright colours lack punch. Motion is ultra-smooth as we’ve come to expect from Sony sets, and detail levels are excellent – but it simply can’t do bright, bold colours.

A strong Freeview HD tuner makes the most of the set’s insight, throwing in sharp edges and reasonable quality sound for good measure but again it lacks vitality compared to its key rivals.

This Sony has definite strengths: style, excellent internet TV features,
ease of use and a detailed picture – but the subdued character lets it down.