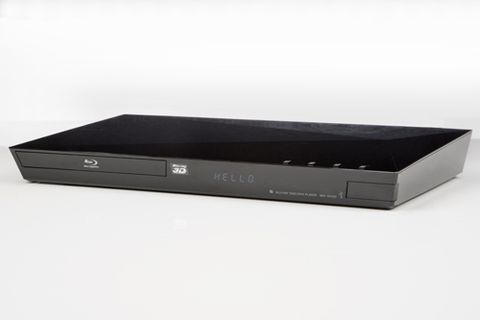 Tired of the same old black boxes? How about one that pretends to be a chunk of rock crystal? That’s what you get with the Sony BDP-S4100 Blu-ray player.

The BDP-S4100 is part of Sony’s latest design philosophy, which features heavily on all of its home entertainment products and Blu-ray players in 2013. Sony calls this the ‘Sense of Quartz’ style.

The unit is sloped and angular, and even the control buttons on the top edge are shaped to look like tiny crystals.

It’s certainly different, but it’s subtle enough not to look silly in the living room. Geology bling: we like it.

What’s the difference? It doesn’t have built-in wi-fi, so you need a wired connection or USB LAN dongle for internet access. The 4100 also consumes less power: 9.9W versus the 5100’s 14W.

Aside from that, there are no differences on paper. The 'S4100 does nearly everything its bigger brother does. You get 3D and SACD compatibility, USB playback and DLNA for streaming from a networked computer or storage device.

It’s compatible with the TV SideView app for controlling the player with your smartphone or tablet. It also has the same inputs: one HDMI and one digital coaxial.

A good specs sheet, then – but how about the performance?

The Sony BDP-S4100 scores very highly when it comes to video. We start with a Blu-ray of Iron Man 3 and the picture is crisp and confident, with a remarkable amount of detail to surfaces with texture.

Movement is handled smoothly: skip to one of the many scenes with Tony Stark’s flying armour and there’s little trace of judder.

The Pioneer BDP-160 has an edge when it comes to boldness of colours, but the Sony offsets this with a greater degree of punch thanks to impressive contrast and cleaner whites. Colours are subtly balanced, with real care given to textures and skin tones.

Switch to one of the night-time scenes and dark tones are handled nicely, with very good detail in the shadows.

We’re happy with the S4100’s DVD performance, too: it’s a strong upscaler, with solid lines and a good stab at noise reduction.

We switch to 3D Blu-ray with The Great Gatsby, and the Sony displays a decent grip on motion.

There’s also a decent sense of depth, with the S4100 presenting a convincingly layered image. It’s fairly bright too, making the most of the film’s scintillating content.

The sound is robust, with good attention given to dialogue. There’s a fine sense of timing too, while explosions sound taut and precise.

In our experience, Sony’s Blu-ray players tend to trade a little weight for agility, and this is true with the S4100.

You’d have to go up in model (and price) if you want that extra dab of richness.

The S4100 is very nice to use. Take-off on Blu-ray is fairly speedy (less so with 3D) and Sony’s trademark Xross Media Bar menu system moves along quickly.

The remote control doesn’t match the distinctive look of the player, but it works well. Buttons are logically laid out, nicely spaced and very responsive.

Too old fashioned? Check out the remote control app on Android and iOS. These are nothing new, but Sony’s TV SideView app is fancier than most.

You get a choice of tiles through which you access a virtual remote and see information on Blu-rays you may have watched. Like the traditional remote control, the app is accurate and very responsive.

That’s just a taste of the smart features on hand. The Sony Entertainment Network (SEN) is a music and video service with good choice of content.

You can also download video-on-demand apps such as Netflix, LoveFilm, BBC iPlayer and Demand 5. It’s not as comprehensive as Samsung’s smart offering at the moment, but there is more than enough here to sink your teeth into.

The Sony BDP-S4100 Blu-ray player does more (and does it better) than we’d expect given its low price.

It offers a strong performance and a host of features you’d find on more expensive models. We’re very impressed.