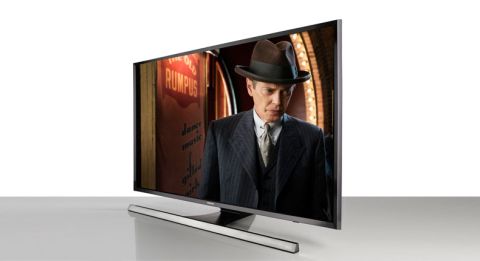 Didn’t think you could get good 4K at 40in? Think again. This is a superb all-rounder for the money

Samsung has had a good run in the star ratings with its JU7000 series televisions. So far, we’ve seen 65in and 48in versions of this upper mid-range 4K set, and now we have the baby of the group at 40in – the smallest size screen Samsung has to offer in UHD.

These more compact dimensions open up 4K as an option for those with less space, and with a price tag under £900, the technology is now more accessible than ever.

Even better, this set follows in the footsteps of its JU7000 family in being an excellent-value TV that delivers across the board, combining features, functionality and performance to make it a very compelling proposition indeed.

To get started, we reach for our trusty THX Optimizer disc to calibrate the picture, and then delve into the advanced menus to make sure any additional processing is turned off.

This allows us to judge the picture in its raw format and only add in the processing we feel is required.

First up, we load some 4K content from Netflix, Wet Hot American Summer: First Day at Camp. The bright 1980s clothing and outdoorsy setting give the Samsung the perfect opportunity to show off its well-judged colour palette, which manages to nail both the subtle tonality in landscapes and skin tones as well as deliver on punch and vibrancy when needed.

Reds, blues and yellows are bold and vivid but never overdone, while the greens in grass and trees are portrayed with a realistic hue – something lesser TVs can trip up on.

For some context, we opt for the Standard picture mode here (and throughout), which offers a good balance between the cooler and warmer colour palettes.

Detail and subtlety are two more strong points. Pictures are as sharp and clean as you’d expect in 4K, but it’s the finer detail and insight that really makes this picture shine.

From strands of hair to the mottling of bricks, textures are realised with precision and never over-etched, while landscapes deliver a believable sense of depth that gives every scene improved perspective.

Motion proves to be well handled too, with smooth pans and judder-free outlines to fast moving objects – we found switching the motion processing to Standard gives the best results here.

Contrast is superbly judged, and a switch up to the darker scenes in House of Cards only shows off just how well this Samsung can see off the competition.

Blacks go impressively deep while retaining their detail, and whites have the ability to push through a scene with brightness and clarity without disturbing the darker areas around them.

Take a step down to a Full HD Blu-ray and the story is much the same. Upscaling is strong, so detail levels don’t take too much of a hit, while contrast and colour balance are as good as ever.

For those interested in 3D, this set includes the active variety, though you’ll need to fork out for your own glasses. A 3D Blu-ray of Hugo produces a picture as crisp and detailed as we’ve noted elsewhere, with colours well balanced and textures expertly handled.

The active 3D is comfortable to watch and gives a lovely sense of depth to scenes, precisely layering the objects to good effect.

We do pick up some instability in fast-moving images, particularly ones coming towards you (rather than sideways), and there’s a touch of ghosting on some objects too.

None of the motion-processing modes are able to get rid of this completely, it’s about finding a balance and taking the rest on the chin as a trade off for the 3D – in the terms of a full movie, it’s only a mild inconvenience in a handful of scenes.

We take another step down now into broadcast TV (take your pick between Freeview HD and Freesat HD), and the HD channels fare pretty well, all things considered.

The picture remains solid and detailed, with clean and relatively noise-free edges.

The colour palette feels a little cooler here than on Blu-ray and 4K, but it’s still a good balance that handles colours with believability and subtlety. Due to the massive amount of scaling required, standard definition pictures do suffer a little by comparison, but it’s a valiant effort that provides a perfectly watchable result.

There is more noise here, for sure, and outlines are noticeably softer and less defined, but the level of detail this set is able to retain is admirable.

Audio performance doesn’t let the side down either, and provides a perfectly usable sound for those who don’t want to immediately make the upgrade to a soundbar or surround-sound system.

Sound is weightier than you might expect, and richer too, with a good spread of sound that works for both small-scale TV broadcasts and action movies.

Voices are expressive but don’t feel detached from the soundtrack, delivering an engaging and well-balanced performance.

The UE40JU7000’s design is nice enough, with slanted, brushed metal effect bezels. The stand is perhaps a little over extravagant and takes up quite a bit of space both in front of and behind the screen, but at least it keeps the TV nice and stable.

As we’ve seen in other Samsung sets, inputs are largely handled by the company’s easily updateable One Connect box, which plugs into a proprietary input on the back panel.

While it’s handy for getting updates as and when they’re launched, it could make wall mounting more demanding.

The box itself offers four HDMI ins (one of which is MHL compatible), two USBs (2.0) and an optical input, plus you’ll find a single 3.0 USB input, component and composite video ins and a headphone output on the back of the TV.

There’s also ethernet for those who want to hardwire their TV, but the on board wi-fi proves to be reliable, easily locking onto our connection.

Once you’re logged on, you can access all of Samsung’s new Tizen operating system, which replaces last year’s homescreens with a streamlined pop up bar, populated by colourful content tiles.

Content management is slick, with a section where you can store your favourites, such as apps like Netflix or iPlayer, specific inputs or live TV. If you access something new, this will be automatically populated here for you too.

You can expand this into all available apps appearing on a full screen.

While it’s a little better specified than Android TV, the firmware on our review set still doesn’t have the likes of ITV Player or Demand 5 (though we’re assured they’re coming soon), meaning you’ll have to make do with on-demand content from Netflix, BBC, Channel 4 and Amazon for now.

With the UE40JU7000, Samsung adds another screen size to excellent JU7000 range, which is very much looking like a go-to series for 4K that won’t leave your bank account wincing.

Balancing a great performance with a strong roster of features and easy usability, this is an excellent set with an attractive price to boot.