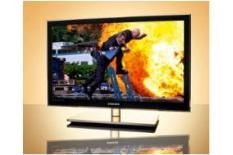 Complete and utter domination. That's one phrase that springs to mind when describing Samsung's plans for the flatscreen TV market. From £7000 luxury LCD TVs to 19in desktop fodder, Samsung offers it all.

And it's a mark of the company's consistency across the board that we can't honestly remember the last time Samsung produced a set that we deemed worthy of anything less than four stars.

There's style with the substance
Well, here we have another beauty (at least in the looks department). It's a shining beacon of elegance, whose glossy part transparent bezel sets it way above most of its rivals.

Specification isn't bad either – it includes 100Hz motion processing, LED backlighting, four HDMI inputs and a couple of media-friendly USB inputs. The menus are thorough, but simply laid out – there's plenty of scope for tinkering with the picture, but not to the same degree as the Philips 32PFL7605

It's a shame that the accompanying remote control doesn't have the same level of styling as the screen itself. There's almost a rushed, last-minute feel to it. For example, it's hard for your thumb to distinguish the D-pad from any of the buttons around it – which can lead to a few miscues, especially during set-up.

Faced with the Solomon Kane Blu-ray, the Samsung produces a fine image on many counts. Detail levels are consistently good, but darker scenes prove a sticking point, as the set struggles to come to terms with
black levels and excavate enough worthwhile detail from the darkest shadows.

This is partly due to the LED backlight sticking its oar in when it shouldn't; it isn't glaringly intrusive, but it does make its presence felt and affected our enjoyment.

The integrated Freeview HD tuner produces hi-def images that are as sharp, clear, polished and noise-free as the very best, while the step down to standard-definition signals is handled pretty well, too.

Sonically, the C6000 doesn't fare too badly for such a slim set, serving up a relatively composed and entertaining sound. If everything seems a little strange initially, go into the menus just to make sure none of the faux surround-sound modes are on, as they can seriously mess up the presentation.

The very best TVs in this category do give you a greater sense of depth and involvement, but the Samsung is still generally impressive and is more than capable of doing the job.