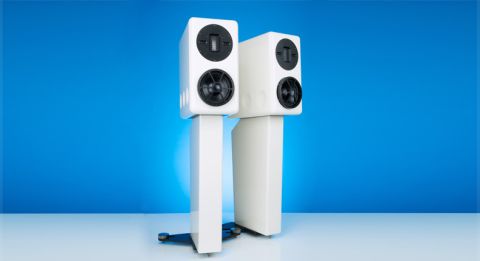 Those with long memories may remember the original Roksan Darius speakers. Introduced in the ‘80s, the Darius was the company’s first speaker; an odd-looking high-end standmounter with a suspended tweeter and, in its earliest incarnations, an intriguing exoskeleton stand.

It could perform really well, if pampered, having a direct and dynamic delivery. Fans of the original might be surprised to learn that the new Darius shares little engineering DNA with that classic design, but having heard them we have to say they’re none the worse for that.

The S1 remains a two-way design. It mates a high-quality aluminium ribbon tweeter (an Aurum Cantus G2N) with a custom-made 13-cm mid/bass driver. That fearsome looking grille in front of the mid/bass is only there to prevent unwanted poking and prodding. Roksan has taken a great deal of care over the crossover design, trying to integrate the two drivers as seamlessly as possible.

Take a look at the quality of the components used in the crossover and it’s clear the company hasn’t tried to save the pennies. The crossover components for treble and mid/bass are also positioned on separate boards to prevent unwanted interaction and good quality internal cabling is claimed throughout.

That smart, internally-braced MDF cabinet is immaculately made and finished. We like the attention to detail, right down to the curved cabinet edges and dimples machined into the side panel.

It makes the speakers look so much more interesting than would otherwise be the case. The enclosure is relatively slim in proportion, but deep with it, to gain a decent amount of internal volume. Look around the back and you’ll find a pair of determined looking reflex ports and a biwire set of rather swish WBT terminals.

While the Darius will work on third party stands, we would suggest sticking to the dedicated supports. These aren’t cheap at £750, but look good and suit the speakers in both appearance and performance. There’s also a tidy cable management arrangement, which is useful.

A word of caution though - if you have young children running around, it’s worth knowing that the speaker/stand combination is fairly easy to topple if it’s bumped. This is due to a fairly high centre of gravity and relatively small stand footprint. The combination is available in two gloss finishes, white and black. Both options look smart. Any speakers at this level need top-class electronics to shine and these Roksans are no different.

Their quoted sensitivity is relatively good at 89dB/W/m but the nominal impedance is 4ohms, which suggests a relatively beefy amplifier is required. We got good results with our reference system of Naim NDS/555PS streamer, Clearaudio Innovation Wood turntable package and Bryston BP26/4B SST2 amplifier. Given this kind of system the Darius S1s soar.

We like them best positioned well out into our test room. It pays to take a bit of time getting the toe-in and the distance between the channels just so. Get it right and these standmounters produce a lovely, well-focussed sound stage that extends well beyond the physical placement of the cabinets. The imaging is wide, deep and beautifully layered with impressive precision.

The Darius S1s are immensely likeable speakers. They have a wonderfully fluid delivery that blends attack, insight and refinement well. Most high-end speakers tend to be mostly about analysis; with the better ones you’ll be able to unravel a recording and spot any errors in production or the musicianship.

That’s great as far as it goes, but we want more. We want to feel the energy of Stevie Wonder at his best on Higher Ground, and get caught up in the hard-charging momentum of the song. This is the area many fall short on, delivering lots of detail without communicating the energy of the music properly.

Not the Darius, which get straight to the core of the track with ease. Equally, play an intricate piece like Arvo Pärt’s Tabula Rasa and we want to get caught up in the drama of the melody and get swept away by the ever-building tension of piece. The Darius S1 manage all this and more.

While they reveal plenty of detail, it’s the way they organise it that impresses us most. These speakers are rhythmical and dynamic, and yet have finesse when the music demands too.

They’re pretty small, standing just 38-cm high, so truly deep bass isn’t on the menu. Roksan itself quotes 47Hz (-3dB) as the low-end limit, so you’ll certainly get alternatives that will dig deeper. But, importantly, the Darius produce enough low-end weight and authority to ensure a lack of bass reach never gets to be an issue in our test room. We never feel like we’re missing out on the lowest octaves.

The solidity at low frequencies is pleasing, as is their ability to render texture on bass notes. The leading and trailing edges of notes are defined neatly. This solid foundation is mated to a quite lovely, flowing midrange.

We’re impressed by the naturalness on vocals and the utterly seamless way they track sounds from the lowest notes upwards. It’s all topped off with a clear, crisp and subtle treble performance that sparkles with cymbals but has the required bite when needed. Tonally, things are nicely balanced and without emphasis on any part of the frequency range.

While Roksan has always made speakers, they have never grabbed the limelight in the way the company’s amplifiers, CD players and even turntables have. These new Darius S1 are good enough to change that perception.