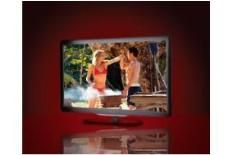 In some areas, this is one of the best TVs around; minor flaws prevent it from fully being so

Blimey, does Philips know how to make a pretty TV, or what?

Last year's models were impressive enough, but this 40PFL7605, the first of the company's 2010 sets, takes that even further. The metal-effect bezel is beautifully finished, and those rounded-off edges give it an air of appealing softness and approachability.

Turn it on and it's even more stunning, thanks to Ambilight Spectra 2, a feature that last year was available only on the 8000 and 9000 series models.

‘Ambilight' means this set has strips of light around the edges of the TV that extend the colour of the on-screen action onto the wall behind. The ‘Spectra 2' bit refers to the fact that the '7605 has two of these strips, one on either side.

Thinking outside the box
It sounds like a gimmick, but actually we find that Ambilight adds extra depth to images, ensuring that when you watch the Avatar Blu-ray, the shots of Pandora's vast scenery are even more epic and expansive.

The Philips also has superb detail levels, which help with this in no small regard. Each tree in the dense jungle is brilliantly defined, and you see every nook and cranny in the underside of the floating islands where the flying banshees nest.

LED edge-lighting is no guarantee of great evenness or contrast, but the Philips manages both. There's no hint of patchiness from the backlight, and the combination of black depth and white punch is exemplary.

What's more, the Philips boasts the kind of colour neutrality that only its closest rivals can match.

Set-up is a fiddly business
This set produces great pictures, then. But, as with many of Philips' previous models, you have to fight with it for a while to get it to do so.

There are loads of processing modes to fiddle with, and some, like the backlight, don't have a proper manual option – you have to rely on one of the automatic, active modes.

With colours, it's the opposite: the cool setting is fairly accurate, but getting the best balance involves playing with the custom tint settings.

There are a couple of other niggles. Even with all the tweaking in the world, the Philips is not a perfect handler of motion.

Turn on the 100Hz motion processing, and vertical pans are truly solid; but horizontal sweeps and erratic movements are occasionally decidedly unnatural. Turn the processing off and you get judder and smear – and none of the options in-between is quite right.

Where's the Freeview HD tuner?
Our other niggles are features based. We're very surprised, nay downright outraged, this Philips doesn't have a Freeview HD tuner. And the Net TV service has little in the way of useful features (though we're assured additions such as iPlayer are coming).

Sure, there are other areas of success: by flatscreen standards the Philips sounds superb, and it also boasts a brilliant, uniquely shaped and intuitive remote.

It upscales standard-definition Freeview and DVD with aplomb, too. But those little niggles all add up, and in the end cost this Philips its fifth star.