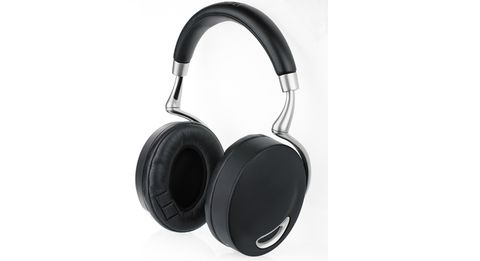 These high-tech headphones deliver decent performance, and put a smile on your face if you’re a fashion-conscious feature-fiend

Parrot claims to have made the world’s most advanced wireless headphones. It’s a bold claim, and the Parrot Zik headphones are certainly priced accordingly. But are they worth it?

They definitely look the part. The Parrot Ziks are some of the most stylish headphones we’ve seen. No surprises there: they were sculpted by French designer Philippe Starck.

Synthetic leather and soft-touch plastic are punctuated by smooth, curved aluminium throughout, while Starck’s trademark orange accents add a touch of bling to the headband. They’re certainly fancy, though still fairly subtle compared with the ubiquitous Beats by Dre.

Put them on and they’re very comfortable. The ear-cups are stuffed with memory foam and the headband’s clamp force is just right.They’re put together well, too: sturdy but not over-heavy. Hinges swivel smoothly without rattling, and the headband expands with satisfying clicks.

The rubbery plastic is quite tough, even after it appears marked – a few rubs and scratches disappear. The synthetic leather on the ear-pads and headband probably won’t withstand prolonged heavy abuse, though – not as much as real leather anyway. Our heavily used review sample had a tear in the headband.

Under the surface, the Ziks are packed with tech. There are five microphones on board: four for noise cancelling, one for calls. A Jawbone Sensor (located, unsurprisingly, by your jaw) feels your mouth moving and tells the microphone to focus on your voice.

Next to this is a motion detector, which senses when the ear-cups are no longer on your face. Say goodbye to fumbling for the pause button when somebody talks to you: just take the cans off and the music will pause. Put them back on and playback resumes.

The onboard Bluetooth is of the 2.1 A2DP variety, with no current support for higher-quality aptX streaming. Parrot makes up for this with an NFC (near-field communication) pad in the left ear, which lets you pair the headphones with a compatible device by rubbing them together.

We tried this with a Samsung Galaxy S3, a Sony Xperia Z and a Google Nexus 7, all of which picked up the headphones immediately. It’s nice being able to do that without delving into menus and settings. According to Parrot, the NFC only works on devices running Android Jelly Bean.

The best part is the right ear-cup, which has a touch-sensitive cover to keep up with today’s swipe-centric mobile culture. It controls like a phone or tablet: tap to pause or play music, swipe forwards or back to skip tracks, swipe up or down for volume.

This method of control is a revelation; it’s such a joy to use that it makes buttons feel fiddly and inadequate. It’s intuitive and responsive, and we’d love to see this idea implemented on other headphones.

The free Parrot Audio Suite app, available on Android and iOS devices, lets you customise the Ziks’ performance. There’s an option to turn the noise cancellation on and off, and also an equaliser, should you desire to fiddle with the way the Ziks are balanced. We recommend playing with this.

Then there’s the Parrot Concert Hall feature, which plays with virtual space and tries to turn your surroundings into a concert hall or jazz club. It’s a fun idea to move some virtual speakers around but in practice this greatly reduced the sense of clarity. We found this to be a bit unnecessary, and kept it turned off.

Last, you can check the headphones’ battery level. The app gives you a percentage of battery life remaining, although there’s no estimate of how much playing time you have left.

The noise-cancelling function of the Parrot Zik headphones works very well. We tried them out by a noisy river and managed to achieve a good amount of isolation. It felt like listening to music in a quiet room, and when a low-flying helicopter went past, it was no more than a minor nuisance. The tech isn’t as effective as the Award-winning Bose QuietComfort 15s, but we certainly have no complaints.

With the power turned on, the Zik cans performed well. There’s a good amount of detail on offer, and timing is fairly precise. There’s also a decent level of dynamic reach.

Connected by wire, we found our music to have a touch more detail and power than when using Bluetooth. The flip-side is that the app won’t work and the touch-buttons are limited to volume control, although this helps to preserve the battery.

In terms of outright sound quality, there is a greater sense of space and articulation from Bluetooth-free rivals such as the PSB M4U2s. Having said that, the Parrot Ziks sound very good despite packing all that tech – something that we find quite impressive.

If you drain the battery, you still can use the Ziks as passive headphones. Used this way, our music sounds less organised, with balance tipped heavily towards the top end. It’s not really how the headphones are supposed to be used, and we really don’t recommend listening this way.

With everything switched on, the battery lasts about six hours. Turn the Bluetooth off and you’ll get around 15. You can get replacements for the proprietary battery (hidden behind a magnetic cover in the left ear-cup) but at £30 a pop, you’re unlikely to have a pocketful of them.

It’s a disadvantage, because rivals like Bose and Klipsch can stretch to about 20 hours and use easily replaceable (and rechargeable) AAA batteries. Having said that, these rivals only offer noise-cancelling – with none of the other frills of the Parrot Ziks.

Are the Parrot Zik headphones the world’s most advanced wireless headphones? Quite possibly – at least in terms of user interface.

The noise cancellation and Bluetooth combination isn’t new, but this is the first time we’ve seen that matched with motion sensors, swipe controls and an app. If you’re a feature-fiend looking for good-sounding, great-looking headphones, these are well worth considering.