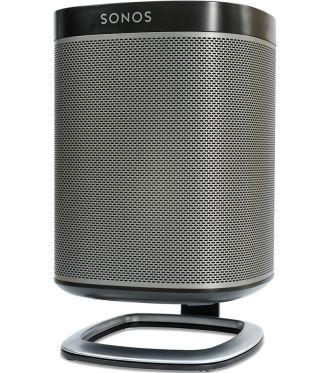 First up is the Flexson Desk Stand for Sonos Play:1 wireless speakers. The stand claims to have the same footprint as the Play:1 but will help minimise vibrations and angle the sound from the speaker towards your ears.

The Sonos stand is metal with a chrome-effect inlay and is available in black or white to match the Play:1.

It's available to pre-order now for £25 on the Flexson website and joins the company's range of wall mounts, ceiling mounts and floorstands.

Here's a clever idea with a jaw-dropping execution. The Hyundai Card Music library is a vinyl library of 10,000 records including some of the rarest pressings of all time.

Housed in a striking, modern building, the collection includes rareties such as God Save the Queen by the Sex Pistols with the original A&M sleeve, of which only 10 are said to still be in existence, and the infamous 'butcher cover' of the Beatles' Yesterday and Today.

The top two floors of the building in Hannam-dong, central Seoul, house the record collection while the 'Understage' is a space for live concerts.

Bayan Audio’s new SoundScene wireless speaker is weather-resistant, and can be paired wirelessly with up to seven other SoundScene units to create a “powerful sound system in or outdoors”.

When paired, each speaker can be placed up to 30 metres apart with, it's claimed, zero effect on volume or distortion. Volume levels can also be adjusted for each individual speaker.

Each speaker is claimed to offer up to eight hours of continuous playback, and produces a 270 degree sound field, with 20 watts of output power.

Finally, a silicone casing means the SoundScene speakers can be placed outside come rain or shine.

The Bayan Audio SoundScene is available now in a silver/grey finish for £179.

MORE: See all our Bayan Audio news and reviews

With the recent resurgence in vinyl, which has seen the Official Charts Company launch the first ever UK vinyl sales chart, it now seems there may not be enough people around to supply the increasing demand for records.

Music promoter Harvey Goldsmith has said factories have been opening up “at a rate of knots” in order to meet the demand. “Sales of vinyl have gone up 100-fold in the last two years.

“And in fact, the biggest problem we’ve got now is that we can’t find the factories.”

One of the biggest issues, says Goldsmith, is finding craftsmen who know how to produce a vinyl record - and bands are having to wait four to six months before they can get their music pressed onto vinyl.

The Creative Draco HS880 headphones are not only designed for gaming purposes, but they can also be used as regular over-ear headphones. They’re fitted with “finely tuned” 40mm neodymium drivers, which Creative says deliver an “extremely accurate and natural sound experience”.

The ear pads are covered with a soft leatherette material, which helps to minimise outside noise interference.

While the headphones themselves aren’t noise cancelling, a noise cancelling microphone is fitted, for blocking out external noise, and enhancing vocals for gaming sessions.

The microphone is detachable, which means the HS880 can double up as headphones for regular music listening.

The Creative Draco HS880 headphones are available now for £50.

MORE: See all our Creative news and reviews

Aumeo is a new audio device, currently seeking funding on Indiegogo. It claims to provide a tailored audio experience for each individual user.

Aumeo says everyone’s ears are different, and so everyone hears sound differently. The Aumeo audio device calibrates the sound settings of your music source to your ears, so that you can “hear your favourite tunes the way they were meant to be heard.”

Aumeo can be used with any audio equipment, as long as it can be connected via a 3.5mm auxiliary cable - it will also accept audio from music players with Bluetooth.

You can pre-order an Aumeo now from $99.

Netflix has always said it would never use advertising as a means of raising revenue. However, users are now seeing what could be described as advertisements on Xbox One, Roku and Tivo devices. Netflix however, says these aren’t adverts in the traditional sense, but “trailers” for the streaming service’s own original content.

Here is a pair of wireless earphones, but with a twist. Instead of using them to listen to music stored on a mobile device or laptop, you wear them during day-to-day activities, and use them to “control real world audio”.

They’re fitted with a Digital Signal Processor (DSP), and a companion smartphone app lets you control volume, equaliser settings and effects. Example uses include being able to suppress aeroplane noise and babies crying, as well being able to boost the bass at a club, or live mixing a concert by adding reverb.

You can even add effects, such as flange, that will change what you hear when you’re talking to people.

Here automatically pairs with a compatible Bluetooth device, and is claimed to last up to six hours on a single charge.

For more information, you can head to Here’s Kickstarter page, where’s they’ve already surpassed their $250,000 funding goal. You can pre-order a pair from $199.