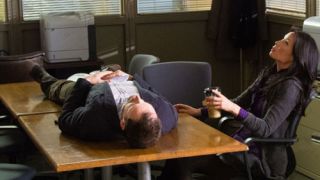 Hi everyone, welcome back to The Week in HD - our guide to all the must-see hi-def TV shows, films and sports for the next seven days. Apologies for being a day late - it was press day! - but not to worry, you haven't missed a single episode of this week's MasterChef (tonight, 8pm, BBC). Here's what else we're looking forward to this week:

The Deductionist. Holmes and Watson have to track down a serial killer who's escaped from hospital, leading an FBI profiler to join them on the case - who just happens to be Holmes's ex.

On the show tonight are current Doctor Who star Matt Smith, no doubt promoting the new Series 7b airing end of March, along with Gavin and Stacey's Ruth Jones and Welsh rockers Stereophonics.

MasterChef is back! And it's the normal non-pro one, with Greg Wallace, John Torode, and a bunch of amateur cooks hoping to impress with their culinary talents. Last week actually set quite a good standard - let's hope this week is just as dramatic and tasty.

Following on from ITV's Marchlands, Lightfields is a supernatural drama focusing on three different families living in the same farmhouse in Suffolk across three time periods: 1944, 1975 and 2012, and the hauntings and tragic deaths that ensue. Already on the penultimate episode 4, we'd highly recommend ITV Player-ing it.

After the Storm. If you've been following Castle, this is a big one. After four seasons of will-they-won't-they, Castle and Beckett finally gave in to their feelings in the finale. As season 5 premieres, they get to grips with their new-found relationship, but not before having to prevent an assassination attempt on a senator - that same senator who's responsible for the death of Beckett's mother.

Five more chefs face the palate and invention test, with three going through to take a busy shift at a restaurant to test their mettle.

Jumble. Another instalment from the J series, Stephen Fry and Alan Davies are joined by Jo Brand, John Sessions and Dara O'Briain to sift through a jumble of things.

The Day That Was The Day. As the first season of this mysterious and supernatural series comes to a close, we finally find out the secret of Ben's past. Ben, meanwhile, faces a life-and-death situation as to whether to save Ruthie from a snakebite, and comes face to face with the mysterious unseen entity, Management, for the first time.

Classic bread. Master Baker Paul Hollywood has his very own show devoted to the history and varieties of bread - seriously, there's more to bread than meets the eye! We start off slowly with just the basics of bread-making this episode, but it does show all the wonderful meals you can make out of a simple loaf.

Based on Audrey Niffenegger's best-selling novel, this movie follows the love story of Henry and Clare, their meetings out of sync and their marriage tested as Henry is born with a genetic condition that causes him to time travel unpredictably. Tissues recommended.

Documentary about an experiement to see if a chimpanzee could learn to communicate with language.

Great late-night viewing if you've got nothing else to do; it may be a repeat, but still quite a lot of fun - especially if you're a '90s kid. Jimmy Carr hosts, with Phil Jupitus, Jack Whitehall, Cluadia Winkleman and Denies Van Outen joining in as panellists.

Okay, so it's not strictly native HD, but having watched the Back to the Future trilogy again recently, I can't not encourage you put it on your weekend watching list. The start of one of the greatest trilogies ever, Marty and Doc fashion a time travelling machine out of a DeLorean and go back to 1955 for one thrilling adventure.

It's been a great series for Top Gear - from Vegas to Mexico and testing the new Kia Cee'd to that epic race from Wembley to San Siro in Milan, and venturing to discovering the true source of the Nile - we've loved every minute. And to relive it, here's a compilation of the best and funniest moments from Series 19. Meanwhile, in real time, Clarkson, May and Hammond are currently in New Zealand filming the next summer series.

Bruce Willis, John Malkovich, Helen Mirren and Morgan Freeman play a group of retired secret agents - who gather together to stop one of their kind from being assassinated by the CIA. It's daft and silly but heaps of fun when you have such a great cast interacting together. Also, Helen Mirren with a machine gun - need we say more?