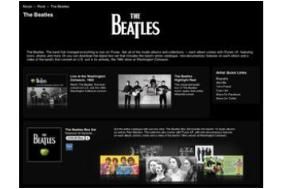 EMI has sold more than 2 million singles and 450,000 albums from The Beatles' back catalogue since their arrival on iTunes a week ago today.

The Guardian has reported an EMI insider welcoming the news as "an amazing achievement", while industry commentators countered that sales could have been higher if tracks had been staggered.

The Beatles' back catalogue has gone live on the iTunes Store, ending a rift between Apple the computer company and Apple Corps, The Beatles' music label.

EMI and Apple have reportedly been in talks for years and the group's hefty, hugely influential catalogue has this afternoon appeared on the iTunes Store.

The Beatles Box Set – the entire catalogue 'for just one click' – is available to buy for £125 and boasts '256 items' including all the music alongside video footage.

If you'd rather pick and choose your favourite, you can pick up an individual track from 99p, marking the first time it's been possible to legally buy a digital track by The Beatles.

Is this the 'exciting announcement' we were promised? With a few minutes to go before the 3pm launch, it certainly looks like it...

Apple is the master of PR when it comes to drumming up excitement (or is that hype?) about its impending product launches, but we have a feeling it may have over-extended itself this time.

Yesterday the iTunes website carried a statement saying there'll be an 'exciting announcement' at 3pm today (UK time), and this morning the web is awash with speculation that the Beatles back catalogue might finally be coming to iTunes.

According to The Wall Street Journal, the deal resulted from talks last week between Apple executives, representatives of the Beatles and their record label, EMI Group.

EMI has been much in the news recently as a result of its financial problems following an ill-timed buyout by private equity firm Terra Firma in 2007. Terra Firma borrowed £3 billion from Citigroup to finance the purchase, but is now in breach of its covenants and needs to generate cash fast.

Whatever the news coming out of Apple HQ this afternoon, we'll be reporting it live here on whathifi.com. Still no sign of that iOS 4.2 update, mind.

We're sorry to bombard you with Apple news so we'll keep it brief: there's to be an announcement from Apple at 3pm tomorrow.

An 'exciting announcement' for iTunes is all that's being trailed on the website, so whether it will be the much-anticipated iOS update or something altogether different remains to be seen.

We will of course keep you updated as soon as we know more...

The latest speculation about the release date for Apple's iOS 4.2 upgrade for the iPhone/iPad/Touch is that it will now make its appearance on November 24th.

According to The Daily Telegraph website, a "source close to Apple" says the release date has been pushed back until later this month.

Apple has refused to comment on the speculation, saying only that the software update will be released in November as it always said it would be.

The web is awash with stories this morning that Apple's much anticipated iOS 4.2 update for the iPad/iPhone has been delayed, apparently due to wi-fi problems on the iPad.

Reports say testers on the iPad found it was prone to dropping the wi-fi connection, so Apple has decided to delay the launch of iOS 4.2 to fix the problem.

Originally it was expected iOS 4.2, along with iTunes 10.1, would be released today. But now it looks as if it will be delayed until at least next Tuesday, November 16th.

The latest Apple iOS 4.2 update for the iPhone, iPad and iPod Touch is set to be released any day this week.

The new software will unify the software on all three Apple devices and bring new features alongside software fixes.

Arguably the most eagerly awaited addition is the AirPlay streaming service. This will allow you to stream any audio, picture or video content on your iPhone directly to any AirPlay device.

Apple's AirPlay software will be found on Apple devices such as the iPhone and Apple TV but also on AV equipment from the likes of B&W, JBL and Marantz.

Our first look at an AirPlay-compatible device was the Marantz NA7004 in this year's Awards issue, though the necessary firmware update wasn't yet available.

Our first proper play with AirPlay will be in the December issue, out this Thursday 11th, with a First Test of the Marantz SR7005 AV receiver, complete with AirPlay firmware.

Features such as multitasking, folders and improved mail integration will all come to the iPad with the iOS 4.2 update.

The alarm clock bug, which saw the iPhone alarm clock fail to update with recurring alarms after the clocks changed, should also be fixed.

We'll be keeping our eyes on the Apple website for any sign of the update this week.