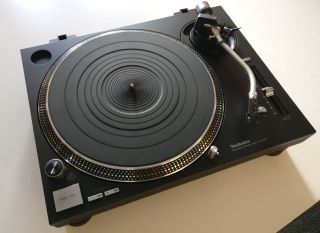 Following the launch of the SL-1200GR at CES at the start of the year, Technics has announced the SL-1210GR – a black version of the new GR turntable, and the first new SL-1210 turntable for ten years.

The 1200GR and 1210GR share the same specifications, with the only difference being the choice of finish.

The Technics GR turntables sport a high-rigidity, two-layer design chassis, with an aluminium platter and BMC base. By contrast, the more expensive SL-1200G has a brass platter.

There's a coreless direct-drive, single rotor motor, as opposed to the twin rotor found on the more expensive model. The platter weighs in at 2.5kg which, along with its aluminium-and-rubber construction, is designed to eliminate resonance.

The turntables claim a torque of 3.3kg/cm and come with a low-mass, high-rigidity aluminium tonearm that's assembled, fitted and balanced by hand.

There are detachable cables on the SL-1200GR and SL-1210GR, a first for a Technics deck, plus gold-plated phono- and grounding terminals. The familiar +/-8 pitch controls (with a 2x option) are of course present and correct.

MORE: The best Technics turntable ever made?