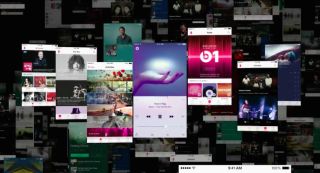 “It’s just another streaming service,” said some, while others simply yawned.

The commentators have a point – very little about Apple Music is genuinely fresh. And yet, it might just revolutionise the industry. Contrary to popular belief, Apple’s greatest strength is not its inventions. The company’s real talent lies in its capacity to rework and polish existing ideas, before using considerable resources to maximise reach.

The company’s plan is to target swathes of consumers and jolt their enthusiasm for music with some of the best features on the market, which the company says is currently ‘a fragmented mess’. It's a strategy that worked with MP3 players, tablets and smartphones, which all went stratospheric after the Apple treatment. Now history looks set to repeat itself with music.

User engagement will be the easy part. The company already has numbers on its side. As of April 2014, Apple boasted 800 million iTunes accounts, all with immediate access to Apple Music as soon as the company flicks the switch. In effect, iTunes could be the most effective Trojan Horse ever.

This preinstalled user base easily eclipses all Apple rivals. And then there’s the three-month free trial, which will no doubt ramp numbers up further. If even 10 per cent of these people stay subscribed after the trial, Apple would already be miles ahead of its nearest rival.

As for the features, they’re nothing new, but nobody has yet managed to combine these disparate elements into a singularly digestible offering.

But what of audio quality? Well, Apple is about fighting smart, not fighting hard. It has previously drawn the line at 256kbps, and seemingly has no interest in an arms race of sampling rates and bit depths. It is content leaving that to the likes of Tidal and Qobuz.

This approach may not chime with audiophiles, but in the end it's almost inconsequential if Apple succeeds. The very fact that the company has entered the fray means music streaming is no longer a niche concern.

If nothing else, Apple’s millions of dollars will serve to increase consumer awareness. Competition will heat up, standards will improve, and hopefully breed a healthier music industry. As Sony Music CEO Doug Morris put it: “A rising tide lifts all ships.” Whatever happens, one thing is certain: music consumption has just entered a new phase.