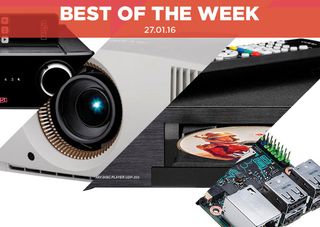 This week, Dali announced its latest speaker series called Spektor, LG Display reached an agreement to produce TV screens for Samsung and Asus developed an alternative to the Raspberry Pi with 4K and 24-bit audio capabilities.

MORE: The best What Hi-Fi? deals of the month - February

The Spektor 1 & 2 (standmounters), Vokal (centre) and Spektor 6 (floorstander) can be combined to create a 5.1 surround sound set-up.

Available in two different finishes, there's no word on availability or price just yet.

Asus has developed a rival to the Raspberry Pi in the form of its Tinker Board.

The Tinker Board can play 4K video and 24-bit audio and has twice as much RAM as the Pi.

It's expected to cost £55, but Asus has yet to officially announce the product itself.

LG Display has struck a deal with Samsung to start producing TV panels for its rival.

Speculation suggests that LG Display, a subsidiary of LG, could start manufacturing screens as early as this year.

Sprint buys 33 per cent of Tidal in new deal

'Love' is a wireless turntable you can control with your phone

8 Amazon Alexa skills for the smart home of the future

That Was Then… Sony PlayStation review

4K has been around for a few years, but this Oppo 4K Blu-ray player serves as a reminder (if you needed one) of how good 4K can be.

With rich colours and superb levels of detail and clarity, the Oppo reveals more subtleties than its closest rival, the Panasonic DMP-UB900.

There are no streaming apps, but with most TVs featuring the main ones, they won't be missed here. This is a spectacular 4K Blu-ray player.

There aren't many 4K projectors out there but Sony's first effort was fantastic. It has upped its game with the VPL-VW550ES.

Colours are realistic and the image looks natural. The 4K HDR performance is outstanding, as is the SD and HD upscaling.

You're unlikely to find any problems with this projector, even at this price.

The successor to Rega's terrific Brio-R, the Brio, is an upgrade in every way.

There's punch, agility and detail, with a sound that's fuller and richer than the Brio-R.

There aren't any digital inputs, which is disappointing. But, it is the performance that lingers. And what a performance.