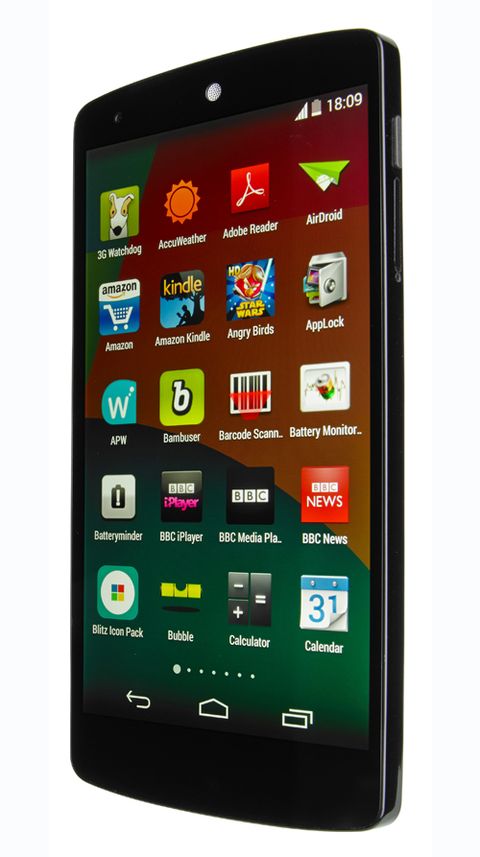 A decent all-rounder that remains a steal, but now left behind by new arrivals

The Google Nexus 5 could be the best value-for-money smartphone out there. IF you're after a feature-packed phone for half the price of the Apple, HTC, Samsung and Sony flagships, then buying Google's latest handset is a no brainer.

You might expect a rather cheap design from a starting price of £299, but no: the Nexus 5 looks and feels lovely. We like the ceramic power and volume buttons.

We look to the back, and last year’s glittery disco glass has been replaced with a polycarbonate slab, which curves gently at the edges to sit nicely in your palm. It has a pleasant silky texture that exudes quality, and is solid enough not to flex and creak.

Admittedly a metal construction has more shiny appeal, but what about those keys in your pocket? A greater resistance to dents and scratches arguably makes the Nexus 5 just as ‘premium’ as the HTC One and iPhone 5s.

The face of the phone is made of Corning’s Gorilla Glass 3. That means it’s super tough and scratch resistant, although we still wouldn’t fling it at the ground.

It's 8.6mm thick: though you wouldn't tell by holding it. Despite matching the HTC One (M8)'s 5in screen, it feels dinkly and light compared with most rivals.

The distinct circular earpiece is a nice design flourish, but otherwise the front is rather unassuming. The main attraction, of course, is the screen.

Sharp, clean lines and well judged colours with natural hues make for a warm and refined display, but it isn't as eye-catching as the LG G2 or Sony Xperia Z2. Contrast lags behind them too.

Move on to sound and the Nexus 5 is also trumped by its rivals despite a decent performance. The sound is clear, detailed and balanced, with a good degree of dynamism and drive but Sony, Apple and HTC do it better.

LG and Google haven’t made a point of advertising the phone’s support for high-res audio up to 24-bit/192khz.

Our FLAC album of Daft Punk’s Random Access Memories loaded up without a hitch and offered up a remarkable boost in subtlety and texture.

Call quality meanwhile is crystal clear, even on a noisy high street, making the Nexus 5 arguably the best-sounding smartphone for voices that we've heard.

The real star of the show is the revamped operating system – Android 4.4, codenamed ‘Kit Kat’. The change is minimal (and minimalist) at first glance. It’s nothing drastic like the barrage of primary colours that you get from Apple’s iOS 7.

The system runs like a dream. Kit Kat was designed to be undemanding, working even with low-end phones with little memory. The Nexus 5 has a bountiful 2GB of RAM and a 2.2GHz processor – so it practically flies.

We tried overloading it by skipping through multiple apps and games while downloading emails (and more apps) in the background, but no luck.

This phone doesn’t do lag, ever. And it’s not just about speed – there’s a lovely sense of smoothness and stability with every gesture.

The other massive overhaul in Android is the integration of nearly everything into Google. Fancy a takeaway? Don’t bother looking up a number before grabbing the phone: just type ‘pizza’ into your phonebook and Google brings up the nearest places. Failing that, there’s a Google search bar at the top of every home screen.

Google Now, the predictive element of the search engine, has also been given a boost. It permanently occupies the far left home screen, showing information based on your location and activities. The idea is to get information ready even before you realise you need it.

Weather updates pop up, as do nearby cinema times and local restaurants. After a few days, Google had learned roughly when we finish work, offering directions home and an estimated time of arrival.

Some people will find this really useful. Others might find it creepy – and they can disable the function altogether. We think it’s a neat idea. It demonstrates a genuine desire to innovate and evolve the way we interact with technology.

With all the computing wizardry we expected the battery life to be appalling. But it’s pretty good, if occasionally a little unpredictable. Used normally, the 2300 mAh battery is more than enough for a day.

But that never happens on Day One: intense faffing about and app downloading meant we were out of juice in eight hours. The screen demands a lot of power, as does scrambling for reception in areas of weak signal.

Thankfully, it charges quickly, sucking up 50 per cent of battery in just over an hour.

Day Two: we unplugged the phone at 7am, and kept it connected to either wifi or 3G at all times. Location tracking was left on, with Google Now constantly keeping tabs on nearby happenings. We went through a few texts and phonecalls, a lot of emails, and took a dozen photos.

Then we spent a couple of hours listening to music, watching videos and flicking through social media sites. By 11pm, there was still 25 per cent of power left.

That’s pretty good, although we would have preferred the LG G2’s mammoth 3000mAh battery, or the Samsung Galaxy S4’s replaceable one.

Downsides to the Nexus 5? Well, the camera could be better. It’s not terrible, but not brilliant either. It has eight megapixels – nothing to scoff at, but the LG G2 and Samsung Galaxy S4 offer 13 megapixels. But the specs of course only tell you so much.

In average light we got decent snaps, although they weren’t as clean or sharp as ones from an LG G2, which also had more accurate colours. See below: Nexus 5 on the left, G2 on the right.

Next, we went out in bright daylight. The Nexus 5 is fairly detailed, but brighter areas are overexposed.

Finally we tried taking snaps in a dark room, and the low-light performance was disappointing.

It also doesn’t help that the camera interface is fiddly. Autofocus is uncooperative in dim lighting, and the symbols for on-screen settings are so minimalist it’s a little confusing.

A lot of these issues could be addressed through a firmware update. For now, we’re a little frustrated, because the rest of the phone is so impressive.

The Nexus 5 finall bows down to more advanced rivals after a lengthy stint as one of our favourite smartphones. It's no surprise: 2014's newcomers have been mightily impressive so far, upping the game in both specs and design (discounting the Samsung S5 on the latter).

Google needs a new champion to regain that fifth star? Did anyone say Nexus 6?

MORE: Google Nexus 5: where to buy it?