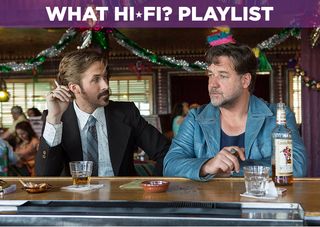 Open with a bang. To make an impression, it’s vital you grab your audience and make sure they’re paying attention. Once that’s done, they’ll be eating out of your hand.

So when Shane Black’s latest film, The Nice Guys, opens with a car crashing through a house with its female driver – an adult actress who happens to be naked – uttering her last words “how do you like my car, big boy?”. Well, you have our attention.

The Nice Guys follows Ryan Gosling’s shabby private investigator Holland March and Russell Crowe’s tough enforcer Jackson Healy, as they pair up to solve the death of adult actress Misty Mountains. Like any case that unexpectedly falls into your lap (or crashes through a wall), there’s more to it than meets the eye.

It’s unfortunate that The Nice Guys didn’t enjoy more success at the box office. The emphasis on character and dialogue was perhaps too much in the face of superheroes, remakes and reboots. Nevertheless, by virtue of keeping things simple, it was one of the summer's better films.

Like Kiss Kiss, Bang Bang, the script features plenty of one-liners and ripostes. Black and screenwriter Anthony Bargarozzi put some effort into building these characters, slowly revealing a backstory about Healy and Jackson that makes them richer characters.

It helps that both Crowe and Gosling are on fine form. Crowe has played plenty of tough guys, but his Healy has an endearingly softer side. Gosling displays some dextrous, physical comedy skills as a gumshoe that’s a bit hopeless and ethically compromised. He hasn't been this funny since, well, ever.

Their easy, relaxed camaderie is the film's major selling point. Some mention should go to Angourie Rice’s Holly March, who dovetails nicely as Holland’s sometimes encouraging, but mostly disapproving, daughter.

We haven’t even mentioned the humour, as March and Healy escape from situations involving a dead body, hitmen and an 'adult' film. That said, it’s not an out-and-out comedy and Black, who had his big break with the first Lethal Weapon, doesn’t shy away from the violence.

The Nice Guys hits Blu-ray with a terrific presentation. Right from the off you get a sense of the film’s black levels which are pitch black. Shot digitally, it’s a clean, detailed image that doesn’t try to recreate that filmic ‘look’ of the era.

Day scenes feel a little desaturated, while night scenes are low-light affairs, lit up by fluorescent/neon sources that add to film’s seediness. It’ll test your TV’s aptitude for detail as well as its black levels.

The dialogue is clear and intelligible, which is an important factor when so much of the humour comes from the performers’ delivery of the many quips.

When the action kicks off it goes loud. Gunshots explode with force and explosions erupt violently but they don't overwhelm. If the film’s opening car crash didn’t startle you, we’d be surprised. A system that's subtle and can go loud without losing a sense of clarity would work here.

Hopefully The Nice Guys meets a more welcoming audience on home video. It's another entertaining effort from Black whose no-frills approach to storytelling pays off handsomely in this tight, well-paced film.

The disc itself is a fine one, with a great looking picture and an impactful soundtrack. We’re confident you’ll have a great time in the company of Shane Black’s acerbic look at the grotty Hollywood of the 1970s.

Buy The Nice Guys on Blu-ray at Amazon

The Nice Guys is also available on DVD and download