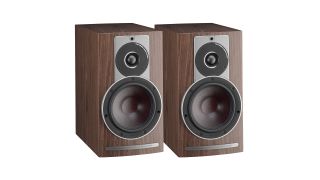 There are a number of ways you can go about building a hi-fi system. Do you go down the traditional route of speakers, stereo amplifier and CD player? Or do you mix things up a bit?

We've put our own spin on what we think is a wonderfully simplistic, yet supremely talented hi-fi system that doesn't sacrifice sound quality.

With people accessing more and more content from music streaming services, all you need is a source that can connect wirelessly and access the millions of tracks available. This is why our source for the system is a pair of streaming-savvy active speakers.

With stereo speakers, integrated amplifier and source all taken care of, you need something to act as a controller for all the features and functionality at your fingertips. Which is why we've opted for a tablet. A smartphone could also work, but in our opinion, this streaming system just works better with a bigger screen.

Essentially, the Dali Rubicon 2 Cs are an amalgamation of Dali’s five-star Rubicon 2 passive speakers (they borrow the drivers and cabinet construction) and the 2018 Callisto active speakers, from which they take the company’s capable Class D amplifier technology as well as the third box in the set-up, the Dali Sound Hub.

And, of course, it’s that little box that makes the difference. The Sound Hub is essentially the brains of the system – a streaming preamplifier that connects to the speakers wirelessly via Dali’s own proprietary network (on either the 2.4GHz or the 5.8GHz wi-fi band, depending on the location and quality of the connection) and transmits audio to them at 24-bit/96kHz.

Only power and a press of the ‘pair’ button on each box are required to establish a connection between them all – handy if your network is down or out of range and you want to listen to an offline source. In fact, the Hub displays a ‘speakers connected’ status before we’ve flipped on the speakers’ power switches.

As the back panels bear only power sockets (each speaker needs to be plugged into the mains), USB ports for firmware updates, and ‘ADC’ (analogue RCA) inputs for directly connecting an external preamp, the Sound Hub is where you’ll find inputs for connecting sources.

There are two digital optical inputs and a coaxial feeding a Burr Brown PCM1796 DAC, a pair of stereo RCAs, a 3.5mm socket and aptX HD Bluetooth. Although that list omits a phono input for hooking up a record player, one can be accommodated through an external phono stage connected to the RCA input.

There are also two modular expansion ports on the Sound Hub’s back panel too, one of which is filled with the BluOS streaming card (included), providing fully-fledged streaming of networked libraries and music services such as Tidal, Qobuz and Spotify – all controlled via the BluOS app. The other port is blank, allowing Dali to create another add-on module if newer technologies come along.

Although the Rubicon 2 Cs rely largely on past Dali engineering – no bad thing considering its success – the Danish company has worked hard to advance the digital-signal processing side of things to further improve driver integration.

While the floorstanders in the range, the Rubicon 6 Cs, use a hybrid soft-dome and ribbon-tweeter design in a 2.5-plus- 0.5-way configuration with their partnering mid/bass driver, the 2 Cs are strictly a two-way active design.

Their 29mm soft-dome tweeter and 16.5cm wood-fibre cone woofer are each driven directly by their own 250W Class D amplifier, and separated into their own chambers within the cabinet in an effort to get the most out of them.

Of course, thanks to the Sound Hub, the speaker cabinets will sit in your living room with only the power leads trailing from them. Any sources you might want to connect to the system – a CD player or TV say – need not be near them in the room; instead, they can be located near the Sound Hub, which, considering it’s no bigger than your average set-top box, should be easy to accommodate.

The speakers themselves look traditionally smart in their high-gloss white lacquer finish (high-gloss black and walnut veneers are also available). The maroon-coloured mid/bass drivers, which have long been a striking design trait of Dali speakers, are present here within rubber surrounds, a bespoke design for the Rubicon 2 Cs in an effort to prevent energy loss. And the close proximity of the neat-looking tweeter above has helped Dali create speakers that are not only smart, but compact too.

Dali’s efforts to integrate the drivers have paid off. The Rubicon 2 Cs’ presentation is wonderfully cohesive across the frequencies: highs, lows and mids are distinctly defined, yet never stray from their seemingly effortless coordination with one another.

Such seamless integration is complemented by a pleasing tonal balance that’s solid through the midrange and bass and crisp up top. Vocal delivery is a speciality of the Dalis thanks to the sheer warmth and clarity offered, while bass notes are equally satisfying both in terms of depth and drive. The treble’s slightly forward nature is emphasised when the speakers are angled inwards and directed straight towards you, so we’d keep them firing straight ahead as Dali recommends.

The Rubicon 2 Cs keep things interesting dynamically, and there’s the precision and organisation to remain engaging when the composition thickens.

Their levels of transparency and way with rhythms are among the most impressive we’ve heard in a system of this kind.

That said, a similarly priced system of class-leading hi-fi separates will dig up greater subtlety. It’s also worth noting that while their commendable transparency is one of their biggest strengths, the downside of having a revealing character is that, when given poorly recorded music, they tell it exactly how it is.

Still, feed the Dalis high-quality music, whether it’s a Qobuz or Tidal stream over BluOS, or a 24-bit FLAC from a hardwired music streamer, and you’ll be rewarded with renditions that aren’t only faithful but also fun to listen to.

The other part of this system is there only as a control unit, really. It could be any smart device, Android or Apple iOS; as long as it can access the internet and is logged onto your music streaming services or NAS device on your network.

Having said that, we think in this context a tablet will do the best job in the most enjoyable way. The larger screen means you can see things such as album art and information far more easily than you can on a smartphone. And in our experience, the best bang for your buck as far as high-performing tablets go is the Apple iPad Air (2019). It’s a supremely well-rounded piece of kit that, as well as controlling your music on the Dali here, also serves as one of the best tablets for all your other needs.

Enjoy CDs and streaming with this extremely simple, yet complete, digital hi-fi system.