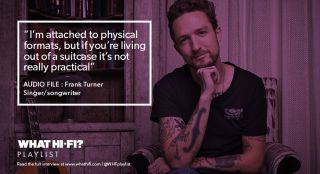 The correlation between talent and hard work has fathered innumerable sentimental social media posts (usually by those for whom neither term is relevant), but even with those two attributes considered, anyone who says they foresaw a decade ago Frank Turner being where he is today is absolutely full of it.

We’re talking a leap from debut solo album - following the disbanding of his post-hardcore band Million Dead - that, albeit sensational, reached only 200 in the UK charts, to peaking at number two with his last two records while drawing huge crowds at major festivals and music halls across the country and overseas.

It has indeed been a marriage of hard work – six albums and as many studio EPs driven by a relentless tour schedule – and an ear for a melody with an aversion to pedestrian lyricism. But also, as we found out while chatting to Turner before he headed to Texas to make solo album number seven, the release of a kind of sonic explorer’s spirit both in and out of the studio.

What Hi-Fi?: Let’s start at home. What kind of kit do you use when you listen to music?

Frank Turner: I’ve recently graduated to a Sonos system. I sort of resisted [until now]; my natural instinct is quite analogue and old school, I sort of wish I were more of a vinyl person than I am, but because I travel a lot it’s not a hugely practical way for me to listen to music most of the time. So I treated myself to a Sonos system the other day and I have to say it’s really changed the way I listen to music.

I listen to a lot more music: it’s fantastic, I can just get up in the morning and get my phone out, put something on in my bedroom and get it on down in the kitchen; it’s a really easy way of listening to music. I tend to buy stuff from iTunes, though – I don’t really understand Spotify; it’s not really for me, I don’t think – and when I’m on the road I have an iPod.

WHF: Do you still have your old vinyl and CD collections?

FT: I do, I have a massive CD collection, which takes up a lot of shelf space in my house, but it’s increasingly gathering dust, I have to say. I’ve ripped it all to my digital devices so I have access to it all. Again, I’m predisposed to be attached to physical formats, but if you’re living out of a suitcase it’s not really practical; I’m not going to carry my CD collection around with me. I still tend to get special records on vinyl, ones that are particularly meaningful to me, and I have a record player I do get out and play records on from time to time.

WHF: What kind of music are you listening to at the moment?

WHF: So your tastes are still rooted in the kind of music you made with Million Dead?

FT: It’s expanded quite a lot. A very large chunk of folk and country records; that’s a thing I’ve picked up in the last decade. But I try to expand my tastes all the time. I went through a phase recently of listening to a lot of Afro-beat stuff and African guitar players, just because I’m trying to listen to things I haven’t listened to before.

WHF: Onto the studio: talk us through your recording process.

FT: Well every album I’ve made has been in a different place with different people, so it changes from record to record. I have Logic on my laptop, I have an audio interface and I demo an awful lot of stuff that way. It’s very portable, so I can take it with me on tour; I demo a lot of stuff in dressing rooms and hotel rooms around the world, and indeed at home. That’s kind of sketching; I’ll lay down some acoustic guitars, some vocals, maybe a little programmed drums, maybe I’ll play a bit of piano into it, that kind of thing. And I have a very hefty pair of Bose headphones that I use, which I know very well; I’ve come to understand the audio response on them.

That’s the first stage of the process, but beyond that it kind of depends. Tape Deck Heart I made in LA with Rich Costey at Evolution Studios, which was an incredible experience, and we spent ages there; Positive Songs [For Negative People] I made in Nashville with Butch Walker and that was a much quicker experience, much more down and dirty: just get in, set up and play. Then end of next week I’m heading to Texas to make another album with another group of people, so it changes from time to time.

WHF: Do you prefer that extra time in the studio or is it easier to just go in and press 'Record'?

FT: Historically, for me, it has depended on what kind of headspace I’m in. With the last record I made, I was very keen to make it very quickly, and for it to sound like it was made really quickly. I wanted a rough-and-ready, dirt-under-the-fingernails kind of thing.

WHF: Which facet of the sound is most important to you when you’re recording an album?

FT: Again, it’s different from record to record, and indeed from song to song, but getting a good performance is the key. I’m a firm believer in a good performance trumping any kind of technical set-up every time. I think a good performance is going to be good, regardless of what you do in terms of mic-ing techniques, pre-amps and whatever else it might be. It’s more important to concentrate on the art than the technicalities.

WHF: Since your music has grown more popular – you’re now playing massive headline shows and festival slots – does that run through your mind as you’re writing and recording, that this is ultimately where these songs will end up?

FT: I try really hard not to let that go through my head. I’m sure it does on some level, but it seems to me that a song should be honest and a song should be loyal to itself. Creatively, it should be whatever it needs to be. I think the idea of trying to write for certain rooms or audiences or stages, however you want to put it, that seems a little contrived to me. As I say, I’m sure it has and does affect my songwriting on some levels, but it seems to me it’s important to shut that stuff out of your mind while you’re actually writing and recording.