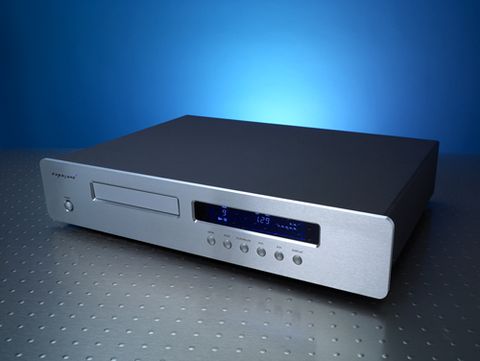 As exciting and flamboyant as it is, the 2010S2 has too many caveats when it comes to dynamics and cohesiveness for us to recommend it over similarly priced competitors

A trawl through countless editions of past What Hi-Fi Sound and Vision magazines revealed that it’s been eight years since we last reviewed this player.

Since then only the name has been changed to bring it in line with the partnering S2 amplifier.

Back in yesteryear, we awarded the then-£600 CD player top marks for its elite build and engaging sound.

That said, it doesn’t necessarily look massively dated compared with its competition. So for a design with nearly a decade-old heritage, it’s aged rather well.

Its build is by no means one of the forerunners anymore, but the silver (also available in black) aluminium casing is smart and a clean frontage is complemented by a relatively long, easily readable electric-blue-on-black display.

Coaxial and Toslink optical digital outputs accompany a pair of analogue outputs and they also survive the test of time – which is more than we can say for the severely outdated remote.

It feels cheap to use and it took us a while to navigate around the crowded cluster of untidy, same-sized buttons. The CD tray mechanism is a bit flimsy too and sounds a bit primitive when loading a disc.

Fortunately, though, no internal noise can be heard when it starts spinning.

What we admired about the original version was how it manifested an "exhilarating sound" and "exciting dynamics".

True to this day, the player is certainly not shy. We were instantly grabbed by its frankly energetic, forward manner. That’s great if you’re playing your party playlist or looking to vamp up your music collection.

If you like an exciting – perhaps a little racy – slant to your music, this might well win you over.

Otherwise, by today’s high standards its full-of-beans line of attack can make it quite hard to listen to more aggressive recordings.

Especially when comparing it to the smooth sonic neutrality of our reference player, the Naim CD5si. Heavy electric guitar riffs sounded messy and brittle in Dry The River’s Chambers and Valves.

Even in Kate Bush’s Running Up That Hill, we heard an artificial hype that clouded the song’s haunting, uncanny expression. We just wish the machine would uncover a more sensitive side.

Vocals did, however, come through clear during our test – even if they felt a little raspy and didn’t reveal all of the varied tones in Bush’s eclectic voice.

Timing used to be considered a strength of this player. Now, its charismatic approach seems to distort rhythm and pace in a way that sounds clearly second-rate in a sub-£1000 CD player.

A criticism of the original 2010S was its over-enthusiastic treble, so we were disappointed when the cymbals in Red Hot Chilli Peppers’ The Zephyr Song sounded brash and ill-defined in this newer version too.

Peddling down to the other end of the spectrum we found the bass, too, suffers from thinness and a lack of resolution.

Still, though not an all-rounder, the Exposure’s volatile sound provides one of the most exuberant listens we’ve heard in a long while.

But know that the 2010S2 forsakes smoothness, cohesion and dynamic attention in return. For this price, we’d really expect a larger dose of all three.

Time has certainly taken its toll on Exposure’s entry-level player.

We still like its giddy character, but it falls short to a good deal of more advanced and competitively priced competition that has stronger dynamics, more definition and a better all-round talent.