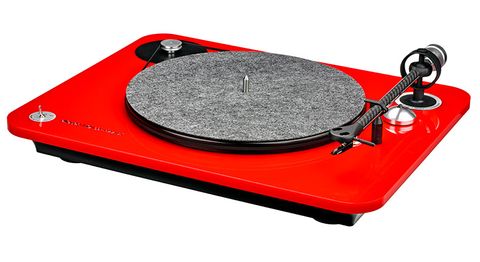 We can’t help but like Elipson’s Omega 100 RIAA BT. It’s a pleasant listen that’s up to date with some handy extra functions

While much of the rest of the world appears to be regressing to the rather unsavoury ideologies of a century or two ago, it is somewhat refreshing to see Elipson acting a little more progressively by nudging the turntable towards the 21st century.

The Omega 100 RIAA BT, which admittedly sounds like something a dentist would witter to his assistant as he rummages around in your mouth, adds a phono stage, USB output and Bluetooth to your trusty record player without dispensing with the company’s traditional aesthetic chic.

It wouldn’t be the first time a hi-fi manufacturer has tacked on a lucky dip of unnecessary extras to its product in lieu of bettering its sonic performance – short of a tin opener Sellotaped to a pair of floorstanders, we’ve seen a lot of, if not all, conceivable permutations.

But these Elipson add ons are entirely relevant to a new epoch of vinyl junkies.

As well as giving you the ability to archive all your records on your computer via the USB port, a built-in phono stage means you can plug the Omega straight into your amplifier while Bluetooth connectivity means, if you have wireless or powered speakers, you needn’t have any physical connections whatsoever.

We refer to these as add-ons, however, because that’s what they are. Elipson has directed its main focus toward designing a turntable that sounds as good through your speakers as it does when a dealer reads you out the list of features.

To that end, the French company claims the orbital bearing structure of the Omega 100 RIAA BT’s tone arm is ideally balanced for precision and accurate tracking – and on the nose it has attached an Ortofon OM10 cartridge, a staple in the past for many of our favourite turntables at this level.

Weight and anti-skating are fully adjustable, so you’ve the freedom to customise with a different cartridge should you wish – but you needn’t toy with it all from the box.

That means set-up is as simple as fitting the belt, plugging in and flicking the Elipson’s gloriously tactile switch to set it spinning at either 33rpm or 45rpm.

We do the former and play Miles Davis’s Kind of Blue. The record’s debonair smoothness is far from lost on the Omega 100 RIAA BT, which manages to combine a respectable level of detail, solidity and an even balance with a dynamic and rhythmic understanding allowing the listener real insight into the album’s character.

No, it isn’t the most analytical of performances – nor should you expect it to be at this price – but nor are we dissatisfied or bored.

James Graham’s delivery is typically glum, but far from sonically gloomy. The Elipson has enough of a grasp of subtle dynamics to colour the performance with the apathy, bile and sorrowful emotion the lyrics so often describe.

The main weakness this record does highlight in the deck is organisation.

Some of Andy MacFarlane’s guitar lines, for example, with their whirling, sweeping delays, are often a tad confused; they knit finely with other instruments, but this Elipson can sometimes appear overwhelmed by the effects in which the guitars themselves are drenched.

We switch to Rega’s Planar 2 and those subtle organisational deficiencies are no longer present. The performance is generally more cohesive, as well as offering an elevated sense of timing and dynamics.

But while in absolute terms the Planar 2 is just more than £100 cheaper than the Elipson, they aren’t exactly direct competitors.

Once you’ve added a phono stage, you’re pretty much at the same price, and that’s forgoing the Bluetooth capabilities.

Still, we’re not necessarily awarding stars for those extras, however useful they may be. If you aren’t fussed about the Elipson’s appendages, this is nevertheless a good-sounding turntable well worthy of its four stars.