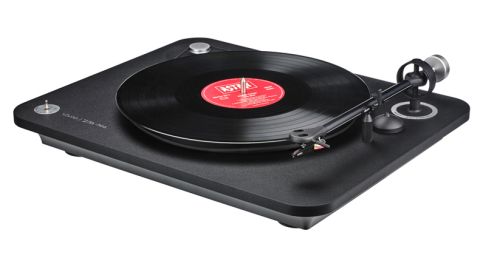 Doesn't quite trump the market leaders for dynamics but is a detailed, balanced and entertaining option

Elipson’s Alpha 100 RIAA must have been designed in the France you see in films.

Sleek, sexy, draped all in black – it would drink coffee with a cigarette permanently between its fingers, were it able.

Its delicately curved edges and minimalist chassis, with undersized platter and oh-so tactile speed-shift switch, are precisely what we’d like to see in our homes.

Simplicity is the order of the day. The Alpha's built-in phono stage leaves you needing only to connect it to your amplifier with the supplied cable. The bias weight is already set correctly for its Ortofon OM10 cartridge, too.

Our early test sample came with cable that had grounding connections, yet there’s no grounding plug on the turntable itself.

Elipson tells us it will pack future batches with cables that don’t have grounding prongs, but if you do get one like ours, don’t worry – the Alpha 100 RIAA doesn’t need grounding.

We’ve already mentioned the speed switch – the Alpha 100 RIAA will spin your 33⅓s and 45s – which (like a child armed with scissors and a plug socket), we can’t stop messing around with, but across the board this turntable is nice to use.

There’s no lever to operate the tonearm but, like the speed switch, gently lowering the needle into the grooves of your record somehow makes you feel more engaged with the whole process.

Meanwhile, despite its straightforward aesthetic, there’s nothing about the Alpha's build that says to us ‘cheap’.

Our first record is Frightened Rabbit’s Painting Of A Panic Attack. We’re greeted with a clean and open sound from the beginning.

There’s plenty of detail in Death Dream, the album's opening track, yet the piano and synthesizers, awash with reverb, are still cohesive and able to create a bed for Scott Hutchison’s vocal.

The instruments are textured nicely without the presentation becoming analytical.

Initially we are impressed by the delicacy of the sound. It has a transparency some turntable manufacturers eschew in favour of beefing up the midrange to over-emphasise those typically analogue characteristics.

We also like the way the piece is allowed to tread lightly into the rest of the album.

Rest assured there isn’t a lack of weight or punch, however. When we pass the opening track, we feel the force of those emphatic choruses in Get Out.

There is kick to the percussion and enough depth in the low end to avoid becoming lightweight, while at the other end of the frequency band the treble is suitably rich, with no apparent ceiling or harshness.

We mentioned there’s no beefing up of the Alpha 100 RIAA’s midrange but that is not to say it lacks body. The vocals have dimension as well as life, and there is a warmth that carries the band’s sound.

Our only doubts are confirmed when we compare the Alpha with the five-star Audio Technica AT-LP5.

The AT-LP5 is a little dearer (£350) but includes a USB output as well as its built-in phono stage, so in essence this is Audio Technica's main rival for the Alpha 100 RIAA.

As we regularly change tack with records from artists such as Charlie Parker, John Martyn and Ludovico Einaudi, we sense just a little lethargy.

We don’t want these performances to sound tryingly overenthusiastic but sometimes it feels as though we aren’t being afforded the music’s full energy.

It was that sense of timing and dynamics that set the AT-LP5 apart when first we heard it, and which shows up the slight weakness in the Elipson Alpha 100 RIAA.

There’s a greater sense of rhythm, both due to the tightness of the timing and the way Audio Technica is able to better track the intensity of each note being played.

It isn’t as if we no longer want to listen to the Elipson – it just doesn’t quite measure up to the market leaders right across the board.

That said, for its detailed and honest sound, simple set-up and unarguably sophisticated aesthetic, we think the Alpha 100 RIAA is well worth considering if you're in the market for a £300 turntable.