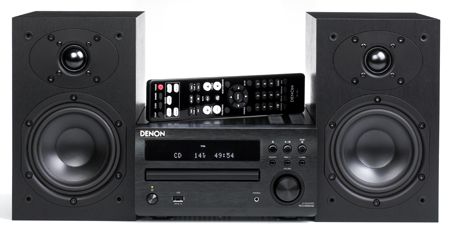 Best music system up to £400, Awards 2014. A stunning sounding system, that makes up for its lack of features in pure sonic ability

Not only has that Denon D-M39DAB recently seen an official price drop to just shy of £310 from last year’s £360, it’s also found itself on the receiving end of a 2013 Best Buy Award at this price too. Not a bad position to be in at all…

And there’s certainly no need to beat about the bush. Everything we loved about this system that won it an Award is immediately evident from the moment you switch it on, and only goes to prove Denon’s skill of producing excellent micro systems at this price.

First things first: there’s a new CD mechanism. It now sits below the display (which makes sense to us) – a position which Denon claims will reduce vibration in an effort to improve the basic function of spinning your discs.

Plus, there’s now an Apple-approved USB digital input on the front, which will not only play music from iPhone, iPad and other iOS devices, but will also charge them even when the Denon’s in standby.

Once connected, you can then choose to either control your listening pleasure via an Apple device, or sit back and use the Denon remote control (handy if you don’t have a super-long Apple cable).

It sounds decent enough, though obviously better-quality music files means a better sound. It also does a decent job with streaming music from Rdio or Spotify.

Android handsets and other devices will have to make do with the regular stereo analogue input on the back of the receiver.

There’s a digital optical input round the back, too, and the DAB and FM tuners are present and correct. If you want wi-fi however, you're out of luck.

The micro system design hasn’t moved on much over the years, so despite the ‘refresh’ the Denon remains a well-built little system, made from quality materials that give it a satisfying heftiness.The remote has had more of a redesign though, with larger keys and a simpler, more intuitive layout.

Standard speaker terminals mean you can connect your own speaker cable, though basic cabling is supplied. And of course (as with previous models) the Denon speakers are optional – but we tested the complete system. The SC-M39 speakers have new drivers, promising a more open and clean sound.

While its spec list might not scream ‘Look at me!’, its sound most certainly does. It’s a very musical presentation, with layer upon layer of detail and insight to its midrange, and an impressively wide stereo image.

Instruments and vocals feel like there’s space for each to breath and perform their part without interruption or issue. And emotion is conveyed in spades, with delicate songs holding onto that sense of fragility.

Yet throw something with bite and pace at it and the D-M39DAB has the attack and dynamic deftness to be able to deliver there, too.

The White Stripes’ Elephant can be a rough-and-ready recording in places, but the Denon keeps control, sounding powerful, detailed and dynamic, yet avoiding any harshness – unless you really crank up the volume.

Plus, vocals are clear and nicely placed in the mix: The XX’s self-titled album sounds delicate, but also fast and agile.

The tuners prove fairly robust and sound clear, the higher-quality FM stations especially, while connection via USB and iOS devices sounds good enough. We like the speakers, too.

Switch to the excellent (but pricier) Q Acoustics 2020i speakers (£160) and, while the bass tightens a fraction and there’s a little more scale, there’s not much in it.

So despite its lack of wireless connectivity and the fact that it’s surrounded by newer, better-featured kit, Denon’s D-M39DAB system remains a formidable component at this price.

And for this very reason it retains its five stars – a system that manages to keep things simple and still knock your socks off is very special indeed.