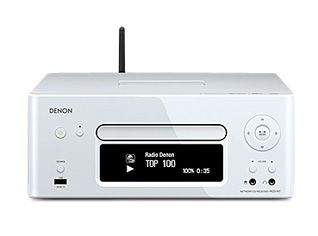 A smooth, detailed sound, plus AirPlay support right out of the box, nets the Denon CEOL a well-deserved five stars

This Denon has a lot in common with the Marantz Melody Media M-CR603 – there’s a black version, too. The fascia’s been rearranged somewhat and the disc drawer has gone all rounded at the edges, but the display and menu system is the same and the remote is identical but for the finish.

The spec sheet is almost identical, too, with a few notable exceptions: the CEOL lacks the Marantz’s DAB tuner (there’s FM/AM plus internet radio) and second set of speaker outputs, but you gain integrated wi-fi and a dedicated iPod dock.

One has to wonder how many different ways one needs to connect an iPod: having a dedicated dock as well as a digital USB connection seems a bit like overkill, and iPhone, iPad and Touch users have the added option of Apple’s wireless AirPlay tech, too – which makes wireless streaming a breeze.

Still, having too many options is better than having none, and as you might expect, there’s no real qualitative difference between the top dock and front-mounted USB, while the audio penalty paid for going wireless with AirPlay is a pretty minor one.

Switching to CD offers a clear step up in quality, though, and the Denon’s sonic style shines through. It has a pleasingly fluid, smooth sound, rich in the realistic midrange details of both voices and instruments.

Play Sbtrkt’s Trials of the Past and the Denon also proves itself to be agile and punchy, though it doesn’t quite match the Marantz’s musical precision or its expressive reach into the highest of treble frequencies.

However, while the Denon’s slightly smoother presentation undeniably has a small impact on punch and overall excitement, the excellent detail recovery and dynamic nuance on offer results in a performance that’s well suited to stripped-down acoustic numbers such as Bonnie Prince Billie’s Wolf Among Wolves.

Like the Marantz M-CR603, this Denon can handle 24-bit/96kHz studio master recordings, and using it as a network streamer is perfectly enjoyable, thanks to its quick, smooth response to commands from the bundled remote or free iOS control app.

Navigating internet radio is similarly straightforward. due to an intuitive layout of stations.

In the end, choosing between the Denon and Marantz was exceptionally difficult – as they’re just so alike. This Denon, certainly, is a stellar machine and worth every one of its five stars.