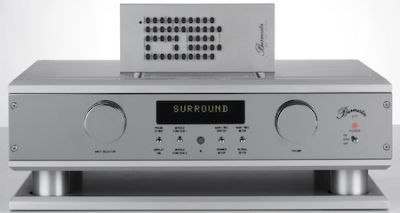 An awesome price for an awesome bit of kit. If you can afford it, buy it right now

The Burmester 077 preamplifier is a cool £19,900 – and let’s face it, spending the better part of £20k on a preamp, let alone well over £50,000 when you include the pair of 911 MkIII monoblocs with which we tested it, is as much an exhibition of wealth as it is a pursuit of audio nirvana.

Fortunately, for those in the market for such products, this Burmester 077/911 Mk III pre/monobloc combo hits both targets square on.

Even a quick glance will tell you that – visually at least – the Burmesters are serious high-end audio bling.

With highly reflective front panels, busy detailing and massive chassis all round they couldn’t be anything else.

Yet look beneath all that show and you’ll find real substance: clearly Burmester takes its engineering very seriously.

Build and finish are as good as it gets, and we can’t think of any high-end alternative that’s passed through our doors over the past decade or so that comes close to matching, let alone bettering, these products when it comes to the sheer quality of both construction and finish.

Every switch and control knob on the Burmester 077 feels exquisitely manufactured, and is chunkily precise in use. It’s something on which the company’s engineers pride themselves, and justifiably so.

Take a look inside and you’ll find the brand’s attention to detail is very much more than skin deep. The 077 is derived from the company statement 777 preamp, which was launched all the way back in 1977: in fact, the 077 was introduced to mark the German manufacturer's 30th anniversary.

The internal layout is are logical and packed with enviably high quality components, and the preamp has some novel features, not least of which are a self-balancing phono stage, designed to handle any channel inequalities in phono cartridges, and a module slot, which provides a line input as standard but can accept a range of plug-ins to expand the flexibility.

Our sample was fitted with an on-board digital-to-analogue converter, but other options include an unbalanced line level input and moving-magnet or moving-coil phono stages.

The DAC module can accept digital signals from both USB (up to 16Bit/48 kHz) and coaxial connections (limitedto 24Bit/192kHz). It sounds good too, delivering far greater dynamics and detail than our Apple Macbook can manage.

There's also a straight-through connection designed to be used with the front channel outputs of a surround processor, allowing the 077 to be integrated into a home cinema system, no shortage of balanced XLR (line level) inputs, andf even twin headphone outputs

Like the monoblocs, the preamp uses balanced circuitry, operates mainly in Class-A, and is ‘Direct Coupled’: this avoids quality-degrading capacitors in the signal path between amplifier stages, and promises better bass performance and clarity.

As well as its design, Burmester takes servicing seriously, too – as far as possible, it will maintain every unit it has made during its 35-year history, and upgrades can usually be retro-fitted, too. We wish more high-end firms had such an attitude.

The 077 easy to use on the whole, as most high-end stereo preamps tend to be, though we’re not convinced about the operating logic of the (wonderful to the touch) toggle switches. These control minor operations such as the brightness of the display or preamp phase (play with it – it makes a difference in some systems), but each switch does more than one thing depending on whether you press down or push up. It doesn’t feel too intuitive.

However, get past this ergonomic quirk (and the large remote handset) and we’re sure you’ll find the 077 a pleasure to use.

And a joy to listen to: although we normally warn against listening to products straight from cold – many tend to sound aggressive and unyielding if not given a suitable amount of time to warm up – the Burmester comnination is different.

Even from the first second of music, the listener is well aware of a splendidly silky refinement and an ability to uncover the tiniest of details. The sound is large scale and fluid from the get-go, too.

Starts good, gets even better

However, let this set-up run in for a few days and you’ll notice improvements in every aspect of its performance. Refinement takes a notable step up and the sense of muscularity, particularly in bass frequencies, gets better. Notably so.

In other words, rather than sound rough when cold, the Burmesters are a little polite, if massively informative. Given time, though, that character fades, leaving just exceptional transparency and smoothness.

The system never sounds rushed or stressed: recordings that normally have amps running for cover, such as Massive Attack’s Heligoland or Stravinsky’s The Rite of Spring, are just shrugged off with ease. But importantly, this isn’t obtained at the expense of excitement or punch.

The trio’s dynamics are deeply impressive, too, as is its ability to deliver seismic bass lines with total grip and no loss of precision. Bass textures are rendered just as light a touch as subtle vocal inflections.

That these big, powerful and pricey amplifiers produce a sound packed with scale, authority and composure comes as no surprise. Much more unusual is that they have the agility and subtlety to deliver low-key music such as Bon Iver’s Michicant with such delicacy.

They even have a decent sense of timing. and thus no trouble communicating the rhythmic drive readily apparent throughout the Kanye West/Jay Z Watch the Throne collaboration. That’s usually

far from the case with high-powered products such as this.

Such a sky-high price tag leads to massively high expectations when it comes to build, finish and performance. And the biggest compliment we can pay this amazing pre/power set-up is that it’s every bit as good as you’d hope.

This is one case where you really do get what you pay for.