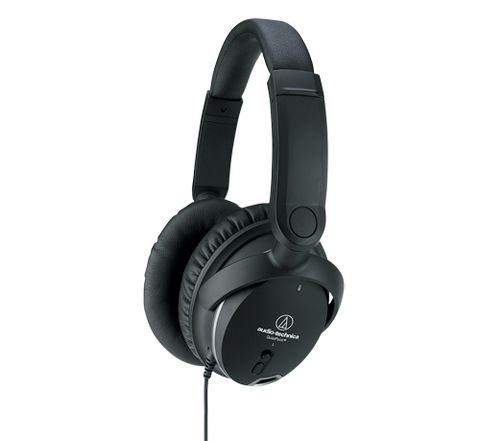 A decent noise-cancelling effort from Audio Technica, but there are more effective options

The Audio Technica ATH-ANC9s are lightweight and comfortable – everything you could want if you’re travelling long-haul. They’re a no-frills design, however, so don’t go expecting brushed-metal this and Bluetooth-enabled that.

But that, in theory, should work in their favour: after all, if you’re not spending the money on bells and whistles, you’re spending it on performance.

The ANC9s’ noise-cancelling abilities aren’t quite up to the best that we've tested, such as the Bose QuietComfort 15 – a lot of the droning low-frequencies of the average workplace or aeroplane are eliminated, but when the music’s off, more extraneous noise gets through.

Get some songs going and it’s a dynamic performance. Snares and bass-drums hit precisely and cleanly, and the up-front midrange and treble make vocals and spoken dialogue sound clear and open.

We like the energy on offer here, but feel that it could get a little much if you’re listening non-stop for hours on end.

Turn the noise-cancelling tech off and the midrange opens out a bit to reveal a more natural sound overall – it feels like the music has breathed a big sigh and relaxed back into itself.

There’s nothing majorly wrong with these headphones, however. They do what they do well – but we think there are more effective examples out there.

If, however, you’re after an energetic sound and don’t fancy shelling out more money, then give these a serious audition.