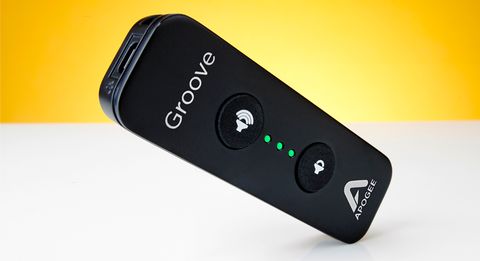 A sound product you won’t tire of using, good for the money, but bettered by its peers

Why the Apogee Groove requires an instruction booklet is beyond us. It’s couldn’t be any simpler to use.

But the Groove is simple, rather than cheap. Despite its size – less than 10cm long and weighing in at only 9g – it doesn’t feel at all fragile.

Holding it feels a bit like you’re doing the weather on telly, too, which is fun. So, well built and easy to use: so far, two ticks.

With Apogee having spent the last 30 years producing equipment for professional musicians, it seems only fair we expect the Groove’s sound to be high quality too.

After all, this is a headphone amp and DAC marketed at those aiming to use it for home recording and production.

Beginning with Morrissey’s Dear God Please Help Me, the smoothness of the sound is immediately apparent. The piano and nylon-stringed guitar intro has a music box feel, almost lullaby-like, which is gentle but confident.

Propped up by that, the vocal is able to glide atop with enough space in the mix for the reverb in which it is drenched not to be hemmed in.

As the song grows in texture and volume, the Groove guides it along without losing any of its gloss – you’d have no problem listening to this for a few hours, which is a fundamental plus if you’re mixing your own music.

In terms of detail, there is enough for the Apogee to be satisfying. You get the whirl and warble of the organ and the breath in Moz’s voice, but the Groove is perhaps not as intimate as some of its competitors.

The drum kit, for example, doesn’t sound as real as it could, and there is a lack of separation between the different strings. Still, for the price, it isn’t far off.

Likewise with dynamics: there are no problems during more exaggerated crescendos or diminuendos, it just lacks that element of human expression of which some of its peers are more capable.

We change pace with Pulled Apart By Horses and I Punched A Lion In The Throat. That smoothness is still there, but it doesn’t let the song become soft. What does take the sting out of its tail somewhat, however, is timing.

The regular changes in rhythm want to sound paranoid, but not confused, lest the screams lose their purpose. For that, timing has to be shirt-tight.

You don’t quite lose sense of the recording, but you certainly sacrifice more of the rancour than you ought to, considering what you could buy for similar money.

Likewise, when we try Yeasayer’s Wait For The Summer the sound is round and full, but it doesn’t force you to move.

It is difficult to pick fault with the Groove (apart, perhaps, from how hot it gets); and it’s generally a good deal.

It’s just that, upon listening to other similarly priced products, we feel justified in expecting a bit more.

A touch extra attention paid to things such as dynamics, detail and timing would make the experience a lot more engaging and, in turn, more enjoyable.

MORE: What is a DAC? And do you need one? Everything you need to know

See all our headphone amp reviews