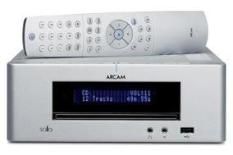 Arcam has done a particularly good job of extending its Solo sub-brand. Starting with the original Solo model, we've now had a movie-playing version, the Solo Movie; an internet-streaming variant, the Solo Neo; and this, the compact version.

OK, the Solo Mini is hardly petite by class standards. It's a fairly usual 23cm wide and 35cm deep, but Arcam has kept things suitably low-slung – it's just 9cm tall – and the quality of build and design gives the Solo Mini a sense of quality that's almost unrivalled.

Bear in mind, though, that we said ‘almost'…

Spec isn't the most up to date
It's been around for a while, this one, and while it's seen the odd price-hike in its lifetime, it does give away its age a tad with its specification.

Yes, it has DAB/FM radio, a slot-loading CD mechanism and a USB input on the front panel; but there's no sign of the network media streaming and internet radio available on some rivals, and, while there's a USB input, its capabilities are somewhat limited.

You can't simply hook up your iPod to this and get the digital connectivity others offer. The USB socket is designed for WMA and MP3 files on thumb-drives, and connecting an iPod requires an add-on Arcam dock, which will give only analogue connection.

You do, though, get four line inputs, a tape output and a pair of preouts, which could be used to link the Solo Mini to external amplification or a subwoofer.

Bearing in mind that, with the addition of some suitable speakers, we're probably looking at a £1000 system, the Mini has an extremely persuasive sound.

It tracks complex rock basslines cleanly, as well as delivering plenty of power; and it is just as at home with large-scale orchestral works, having both authority and the ability to reveal bags of detail, while remaining smooth and easy to enjoy.

Voices are full-bodied and expressive, though, and there could be a bit more air and space in the treble with atmospheric live acoustic recordings, but better that than a rough, in-your-face presentation likely to prove wearing over time.

So, as in our 2010 Awards, the Arcam takes top honours for absolute sound quality.