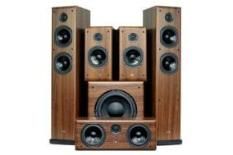 A solid, dependable system, it does everything we’d want in a home cinema system, although some rivals do it better

This system from a long-established brand uses floorstanding Neo Threes at the front, Neo One standmounters for the surrounds, and a decent-sized centre channel and subwoofer.

This is system with no qualms about delivering a gung-ho, waking up the neighbours style sound. Powerful, weighty, fast-paced action is the order of the day, with Alien vs. Predator – Requiem sounding thrilling and yet still controlled at high volume.

However, a complete room sweep, courtesy of the superb landing scene in Flags Of Our Fathers, highlights some lack of integration between fronts and rears. The satellites don't have the same reach as those in some rival packages, making for a less all-encompassing surround sound.

Fast, attacking sub
You should never underestimate the importance of the subwoofer in a surround system, and sure enough the one used here is key. It delivers a fast, attacking delivery under-pinning nicely all the fun and games that the rest of the system gets up to along the way.

Listening to the more musical, subtle soundtrack on the Enchanted BD, it's clear this AE package can tread more carefully when required, too.

The clear, open centre channel ensures solid dialogue, while the satellites display a crisp yet balanced top-end. There's not quite the refinement of the some rival systems, but we certainly never find the AE's delivery lumpen or simplified.

Available in walnut brown or black ash, this is a big but fairly beautiful package that backs up appealing looks and design with quality sound. The high standard of rivals makes us want for a touch more dynamism and, at the other end of the spectrum, refinement, but this remains an accomplished offering from Acoustic Energy.