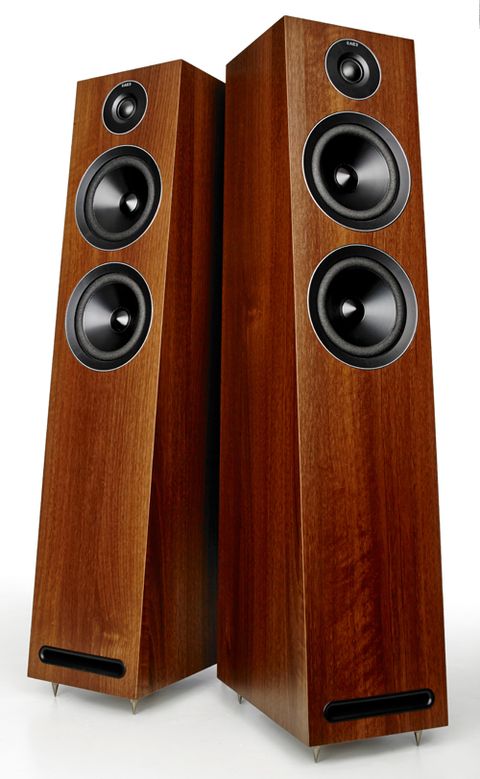 A compact, practical design, but not the talented 3-Series-like performance we were hoping for

The 103 floorstanders are our first glimpse of the 1-Series – Acoustic Energy’s latest entry-level range.

The British manufacturer used to have good form in this field, but that was years ago and it’s struggled to deliver results of late.

So the new series marks a fresh effort to regain its reputation in this market.

In addition to the 103 floorstanders, the range is made up of standmounts, a centre speaker and subwoofer.

The company claims the 1-Series has similar capabilities to its mid-market 3-Series, but in a smaller package and at a lower price.

We liked what we heard of the earlier series, so we have high hopes.

The 11cm aluminium-core mid/bass drivers have been carried over into the 1-Series, and are hard-anodised for rigidity and dampening.

The 28mm soft-dome tweeters stick too, with the crossover remaining the same. The cabinet’s slotted port design is also similar.

It’s put on the front panel to make the speakers less fussy about placement.

AE has kept the easy-to-mount magnetic grilles with the 103s, which prevent any ugly puncture-wounds in the baffle – although the finish of the speakers is not as sleek as the 3-Series.

The 103s are available in ash, walnut or a high-gloss white vinyl wrap. They still look impressive however, with their sloped baffle and silver-trimmed cones within the compact design.

The 103s are 85cm tall and 19cm wide, so they are practical: if your house is tight on space, then they’re a good option.

AE says the speakers were designed with smaller rooms in mind, and their slim build makes them easier to accommodate than most rivals.

There is no bi-wiring on the 103s, but they do come with spiked feet that can be attached – and we would, as they offer optimal performance.

As for that performance, well, the sound is even and clean – there is precision and detail is to be found here.

Stereo imaging is an asset of the 103s too.

Supertramp’s Give A Little Bit gives good placement to the acoustic string ensemble and, while Eminem’s skits are usually something we skip, the 103s bring the narratives to life, with sirens and footsteps well imaged.

The leading edges of notes are crisp on the 103s, although they do lack fluency. The intro piano on Daft Punk’s Within feels stop-start.

The speakers can sound thin and could do with more warmth and smoothness in their sound – despite running them in for a week, our music was still somewhat undernourished during the test.

Placing the 103s close to a wall, say, makes a significant difference.

You lose the spacious soundfield, but the sound fills out a bit and you get a more rounded feel, thicker vocals and more convincing midrange in return.

Fiddling with placement can’t cover over all the cracks, however. The 103s’ poor grip on timing fails to communicate the pace of music as well as class leaders manage.

Rimsky-Korsakov’s Flight Of The Bumblebee is delivered with an erratic tempo and the 103s just can’t keep up with the orchestral interlude’s momentum.

Sat next to our Award-winning Q Acoustics 2050is, the 103s are dwarfed in the shadows of their towering pillars – but the issue here is not just size.

The 2050is handle rhythm better, have a richer presentation and more pep.

The 103s can’t provide quite the dynamic reach of some either – nor is there quite as much room around instruments.

They can sound a little congested next to the best rivals.

The 103s are by no means a bad start for Acoustic Energy’s 1-Series, but they could undoubtedly perform better.