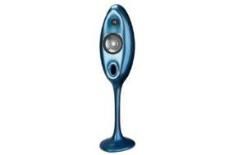 If qualities such as resolution, speed and dynamics are important the V1.5s should be your first audition at this price level

Vivid Audio might be a new name to many people in the UK – the company is based in South Africa and was founded back in 2001 – but there's a great deal of audio experience behind the brand.

The engineering director used to work for B&W, and engineered the iconic Nautilus speakers. Not a bad thing to have on a speaker designer's CV, is it?

It's fair to say Vivid's V1.5s are some of the most distinctive-looking speakers we've seen in years – perhaps even since the Nautilus.

The review team were split over the appearance – some likening the V1.5s to an alien from the TV series Futurama.

Unusual looks, beautifully constructed
However, there was no such debate about their construction. In this respect, the V1.5s need fear no rival. They're beautifully made, and are every bit as lovingly finished as you'd hope at this price.

They come in a wide range of colours, too, which is good news for the house-proud. There are five standard options – oyster, graphite, sahara, pearl and copper. If none of these appeal, custom finishes, as seen here, can be ordered for an extra £570.

The V1.5s' drive units build on the experience gained with B&W's flagship and follow similar principles. This is a two-way design with both mid/bass and tweeter using aluminium diaphragms.

The larger driver has a carefully honed motor system and an open chassis to let the cone move as freely as possible when subjected to large inputs, such as big dynamic swings at high volume levels.

Innovative engineering
The dome tweeter has a tapered tube behind it to absorb rearward radiation. The idea is to prevent the rearward sound from spoiling the purity of the tweeter's output.

The job of combining the two drive units falls to the crossover, which is housed in base of the stand: a place where it's well away from the vibration forces and stray magnetism found inside the cabinet.

That cabinet isn't different just because of its shape, though this does minimise diffraction and reduce internal standing waves. Both lead to a clearer sound.

A cabinet of such a shape would be impractical to make out of wood. And indeed, why would you, when you can use a composite carbon-fibre-filled polymer that is both rigid and well damped?

It would be a shame if all that engineering effort resulted in a poor sound. Thankfully, it doesn't.

Neutral, agile and packed with detail
These are terrifically clean-sounding speakers that manage to deliver masses of detail, strong dynamics and astonishing agility.

At first, the Vivid's speed at low frequencies suggests a certain degree of bass lightness. It turns out that this impression is due to the V1.5's speed and tautness in this region rather than any shortfall in output.

All you need to do is take a listen to The Dark Knight's OST for proof of that. These speakers play torture tracks such as A Dog Chasing Cars at high levels with ease.

There's little extra in terms of control, composure or analysis that you can reasonably ask for at this price level: the real strength of these speakers isn't that they dig up masses of detail or do it in a tonally convincing way.

Unfussy about positioning
It's more that they present all that detail and tonal neutrality in such a natural and unforced manner. We have no doubt that the Vivids' organic way of handling dynamics – both small and large scale – has much to do with this.

The nice thing is that these monitors are relatively unfussy for such finely tuned devices. Give them a little room to breathe if you value tonal evenness and a wide, well focused soundstage, and just a touch of toe-in for greater image placement precision.

As far as system matching goes, just buy the best you can afford. Provided it's dynamically capable and can deliver the kind of naturalness and insight the Vivids are capable of, you'll have no problem.

It's always nice to come across a new brand that really offers something both fresh and interesting.

In doing this, Vivid Audio has come up with a product that's as good as the very best in the class. We can't wait to hear the rest of the range.