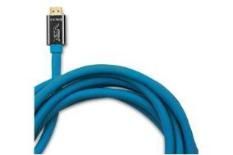 It has a clear, realistic and detailed picture - it's just the price that hurts

There's a lot of pressure on Van den Hul's latest HDMI cable. It's called the Ultimate, so anything less than five stars and it'll be a case of the not-so-Ultimate.

Thankfully, this HDMI v1.3 cable lives up to its name.

The Ultimate really does impress with its clear, detailed, realistic picture. Even more apparent is the sonic ability of this cable. It sounds controlled and composed.

The level of refinement and finesse that it encourages is there for all to hear. It's capable of delivering the explosive adventures of Rambo with gusto and is equally adept at creating a tense atmosphere during Batman Begins