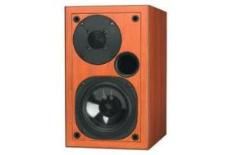 By no means bad speakers, but they don’t quite do enough to challenge the market leaders

The S-520 is the company's entry-level speaker and is marketed as an affordable introduction to ‘high performance sound'. To an extent, Usher makes a good case for itself, but the S-520 can't quite match the best in the UK's overcrowded sub-£350 stereo speaker market.

Mixed impressions
First impressions of the Ushers are a bit mixed. They're not exactly stylistically inspired, but they'll appeal to those who prefer their speakers to look traditional, and they feel solidly built. If you do want to make them look a bit more exciting, there are a number of finishes available, including Ferrari Red and Gloss Yellow.

The first thing you notice about the Ushers' sound is the clarity and detail they offer. Try Adele's Daydreamer and you'll be thrilled by the texture and depth to the vocal delivery and acoustic guitar. Timing is also impressive, with the S-520s doing a great job of conveying the rhythm and flow of The Pretender by Foo Fighters.

However, the S-520s aren't perfect. The Bridge of Khazad-Dûm from the Lord of the Rings soundtrack exposes a degree of flatness to the sonic delivery, both in terms of dynamics and tonal range.

There's simply not enough distance between the loudest and quietest notes; treble isn't as open as it should be (and can be a bit hard), and bass doesn't go quite low enough. Positioning the speakers close to a rear wall adds to bass authority, and it's clearly where they were designed to go, but they still don't dig as deep as the best.

Overall, this lack of dynamic bite leaves you with a musical delivery that is always pleasant, but tends to be more relaxing than invigorating, and in our book, that's not what the highest-quality hi-fi is really about.