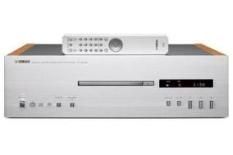 A beautiful object, beautifully made – though it’s not without aural shortcomings

If we were to dwell on the tangibles of a CD player's quality of build and finish, as well as the not-quite-so-tangibles of pride of ownership and desirability, then the Yamaha CD-S2000 would beat the opposition hands down.

Thanks to its beautifully milled aluminium fascia, its wooden side panels and its ineffably tactile control buttons, the Yamaha is a joy to behold and to use – it's even got one of the smartest remote controls we've seen.

It's probably not too healthy to get hung up on the way a CD player retracts its disc tray, but the CD-S2000 loads a disc with the same sort of unarguable solidity as the closing of a Rolls-Royce door. It feels worth about, oh, 10 times the price of the Cyrus CD8se.

That it doesn't sound 10 times as good as the Cyrus shouldn't really surprise anyone. With a copy of Pepe Deluxe's Spare Time Machine unfalteringly loaded, the Yamaha is, initially, underwhelming – it seems rather aloof, cool and collected at all times but unwilling to throw caution to the wind if the material demands it.

Stick with it for beautiful tonality
Listen longer, though, and the 'S2000 reveals itself to be a subtle and dextrous performer. Tonality is beautifully even throughout the frequency range, testing dynamics are handled with conviction and it doesn't scrimp on the details.

Given a chance, the Yamaha is an involving and communicative player that eschews histrionics in favour of a sort of microwave-oven cooking-without-heat approach that should find many admirers.

There's even more of this unflappability on display when playing an SACD – our copy of Pink Floyd's Dark Side Of The Moon (say what you like about SACD, the choice of titles isn't going to confuse anyone) sounds big and burly, but with all the dexterity and detail the intricate material demands.

Where the Cyrus CD8SE describes rhythms with a straight-edged, incontestable authority, the CD-S2000 is relatively sloppy – it allows rhythms to undulate troublingly, like a recently vacated waterbed.

We wouldn't criticise you, though, if you decided to live with this unfortunate trait just to have the Yamaha there on your kit-rack.