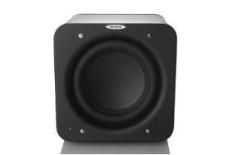 Forceful low frequencies at any volume level, but hamstrung rather by vague timing

‘Conservative' is generally the word when it comes to subwoofer design, so any deviance from the ‘bluff square box' norm is to be applauded, even if it's as mild as Velodyne's ‘slightly rounded box' aesthetic.

‘Conservative' isn't a word readily associated with the 1000i's sound, though – this is subwoofer capable of considerable clout. Beefy, substantial low frequencies are bolstered by good tonal differentiation and an impression of limitless power.

It's a pity, then, that the leading and trailing edges of bass notes are so compromised in the Velodyne's hands – there's a lack of focus to the beginning and end of sounds that can only be described as ‘blurry'