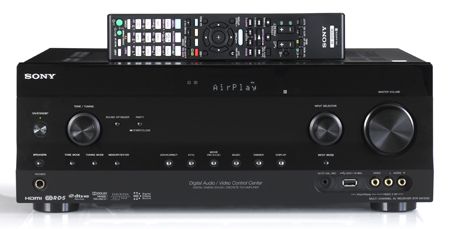 Sony has seriously upped its game with the STR-DN1030. This is a serious contender for class-leading status

Sony’s had a patchy track record with its home cinema amplifiers over the past couple of years. But its engineers have left no stone unturned in their quest to make the new Sony STR-DN1030 as competitive as possible, putting huge emphasis on the receiver's construction and engineering.

From the outside it bears some resemblance to the entry-level £300 Sony STR-DH820, one of our 2011 Award winners. But on the inside, there’s all manner of custom-built, Sony-tuned components including a beefier power supply and overall a more robust chassis design.

Then there’s the fact it sounds significantly better than its cheaper sibling.

Agreed, straight out of the box the Sony sounds a little hard and aggressive, and takes a couple of days of solid running-in before it’s anywhere near its best. But give it time to loosen up and its best is absolutely brilliant: the STR-DN1030 performs superbly, and is a real contender for top honours at this price.

Explosive soundtracks sound remarkably powerful and robust. As the Kremlin combusts in Mission Impossible: Ghost Protocol, you can virtually feel the earth move beneath your feet. Explosions display impressive weight, but remain taut and controlled throughout.

There’s a fine openness to the sound but there’s also real bite and attack – and precision, too. When the Mission Impossible action moves to Dubai, the Sony conveys the violence and power of the sandstorm scene with ease: detail levels are excellent as the grains of sand rain down.

Integration between surround channels is excellent and effects are steered around channels rapidly and with great confidence. Switch over to more dialogue-heavy scenes and voices sound clear and crisp: the amp allows plenty of emotion and detail to seep through.

Two-channel music is handled in a similarly confident manner. Arcade Fire’s Ready To Start sounds spritely and agile, with the Sony keeping an excellent pace and rhythm: bass notes are easily distinguishable, but don’t stand out too prominently from the rest of the track.

Switch to wireless streaming via AirPlay and the music loses some of its weight and body, but it’s still perfectly listenable.

The Sony has a fairly standard feature list. There’s a cluster of five HDMI inputs on the rear for connecting high-definition sources, plus video upconversion and upscaling for low-resolution video content.

Sony’s Advanced Digital Cinema Automatic Calibration (DCAC) speedily sets the amp up for your speaker layout using the mic provided (right), although it always pays to go into the menus just to double-check all the readings – we had to take our subwoofer levels down a few notches.

But the Sony STR-DN1030 does have one extra trick up its sleeve.

Wi-fi has been a regular feature of Blu-ray players and Smart TVs for some time, but this is the first time we’ve seen a manufacturer include it in a home cinema amp at this price.

Given the multitude of networked features on these modern machines (not to mention the need for regular software updates), it makes sense to be online all year round. And the Sony’s wi-fi connection works very well.

Set-up is achieved through a combination of remote control and on-screen menus, and once the receiver'sup and running, you can take advantage of vTuner’s internet radio service and also stream tunes from the Sony Entertainment Network (SEN) – provided you have an account.

There's also DLNA streaming and a front-mounted USB socket for Apple and Sony devices or flash memory, and if you happen to own one of Sony’s wireless speaker systems, you can hit the amp’s ‘Party’ button and fire tunes wirelessly from the STR-DN1030 to multiple Sony speakers.

The only slight frustration with the receiver is that it could be easier to use, which is very unlike Sony. The supplied remote is rather large and cumbersome (Sony’s Media Remote app for iOS and Android devices fares slightly better) and some of the on-screen menus are terribly cramped, especially when you’re using some of the music streaming functions.

It’s just frustrating when every other aspect of the machine’s performance is so impressive.

It always takes a special AV amp to boss this £500 sector, but the Sony definitely has the sonic credentials needed to take the fight to Onkyo et al.

Next month’s Group Test looks set to be a real heavyweight bout.