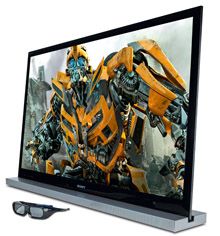 A renewed show of strength from Sony – exhaustively specified and thoroughly capable. However, Sony has stated some models may exhibit 'un-uniform' brightness

In light of Sony's official statement - shown at the bottom of this review - regarding potential 'un-uniformity' of brightness in its HX923 range, we have downgraded our original five-star review to a four-star rating.

If you can find a flawless model - as our review set was - then this is remains a TV well worth considering. Further buying advice, including information on affected sets, follows the test below.

Sony will tell you this, the flagship model in its 2011 range, is the best TV in the world.

Not sure we’d go that far, but this 46in, LED-backlit LCD flatscreen is quite possibly the best Sony television we’ve yet tested.

There’s certainly a boatload of reasons to get excited about it.

From upgraded features to new technology, plus the Monolithic design and stand that makes the sound actually quite decent, and new 3D glasses, the screen represents a formidable statement of what Sony’s TV division can do.

The 46HX923 looks every bit the hero. The set measures a slender 3.8cm deep, thanks in part to a new OptiContrast panel made with the same Gorilla glass you’ll find on the iPhone 4.

There’s local dimming on the full-array LED backlight, and Sony’s new Intelligent Peak LED technology on board. This, found only on the HX923, promises an LED boost to produce a more dynamic picture.

Picture Engine X-Reality sounds suitably futuristic and takes the places of last year’s version of the Bravia Engine at the heart of the set.

As well as a host of new noise-reduction techniques, the engine is also clever enough to sniff out the quality of content being delivered and then make adjustments so that we see it at its best.

This is most relevant with low-res internet TV content, when the set will boost sharpness and apply the noise reduction more readily.

Sony also claims to have enhanced the 3D experience. The glasses are lighter and now rechargeable via USB – two pairs are included. They will work with older Sony 3D TVs, and our older glasses worked with this set. 3D is now delivered at 200Hz; the new engine, it’s claimed, better counters crosstalk.

Last year’s 3D just got better
And the evidence certainly supports this. 3D content is, perhaps, delivered with greater depth and more drama by the best sets we’ve seen, but this is certainly an improvement on last year’s Sony sets.

The picture is solid, less affected by crosstalk and easier to watch. You still have to keep your head fairly still; tilting the glasses causes the 3D image to blur.

Sony tells us this negative comes with the positive of it being less susceptible to flicker, which does seem to be true enough.

It helps that the basic picture is so impressive. The 2011 Sony TVs we’ve seen so far have been somewhat underwhelming, but the HX923 does its level best to deliver enough wow factor for the whole Sony family.

Some owners have reported 'creases' or vertical lines down each side of the screen, but we saw no evidence of that on this set.

These glossy but insightful black levels, ably shown by the Blu-ray of Harry Potter and the Deathly Hallows, are the foundation for a dynamic picture that grabs attention and instantly engages.

Solomon Kane isn’t one for the faint-hearted but there’s a level of subtlety to the picture (largely missing from the film, it has to be said) that the Sony is happy to reveal.

Natural colours are presented faithfully and there’s detail and texture to skin tones.
It’s a filmic presentation with a glossiness to those deep blacks set against clean whites.

Using Motionflow on Standard – the two new settings, Clear and ClearPlus, we find a little unnatural – we think Sony’s motion processing is still ahead of the rest.

The Freeview HD TV tuner is very strong, too. Again it’s HD content with which this set really thrives, but you can count on some of the smoothest, most natural off-air images we’ve seen even with SD.

And there’s so much more to do here. Bravia Internet Video has had a shake-up, with a fresh interface and increased content. There’s USB recording via one of the two USB inputs, too.

Sony recommends Western Digital hard disk drives, and guarantees their compatibility, but our own powered USB drive worked fine, as should any 32GB+ powered HDD.

Integrated Skype camera
A camera is integrated for Skype calls – all the gear is included – and to work the Presence Sensor, which lets off a noise if it thinks anyone is about to stick fingers on the screen.

It will also turn the set off if you leave the room for long enough.

There’s a heck of a lot to get to grips with here. Yet ultimately it is the picture with which we are so impressed. Deep but detailed black levels underpin bright, dynamic colours, all delivered with a level of finesse and attention that really commands your attention.

Competition is beyond fierce in the TV market, but this KDL-46HX923 shows Sony is more than up for the fight. We can’t wait for the 55in model.

EDITOR'S NOTE: Since testing our (flawless) review sample, we've heard some user reports of quality-control issues with HX923 sets (46in and 55in).You can read examples in this Forum thread.

Sony has issued this official statement, confirming there may be some 'un-uniformity':

"After a thorough investigation, our engineers have not detected any process or production issues for these TV products. These TV products have a special structure at the front of an LCD panel for achieving vivid picture by improving its optical characteristic. The structural characteristic might provoke a slightly visible un-uniformity of the brightness around the outer periphery of the display.

All shipped products have passed our internal quality test and such un-uniformity is within the specification. We are already explaining this to the few customers that have contacted us.

If any customers have a question about these products then please contact our customer services on 0844 846 6555."

We would advice potential purchasers to get retailer assurance that any unsatisfactory sets will be swapped/refunded as necessary.