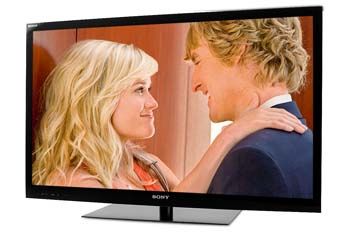 A fine mix of features and value; not a world-beater, but a consistent, appealing TV

Sony’s KDL-40NX713 sits on the cusp of old and new: while it’s nominally a 2011-series television, facets of its design cling to 2010-era Sony principles.

For example, and unlike other new-generation 3D-capable Sonys, the NX713 still requires the purchase of a 3D transmitter dongle and glasses, adding at least £150 to its price. That aside, the Sony is well priced – we’ve seen it for £900 at some retailers – and its performance is exemplary.

It’s an LED-backlit set too, although it uses edge-lit technology, rather than the superior full-array system found on pricier sets. As with most recent Sonys, it also includes an excellent digital tuner, making the 40NX713 a terrific choice for day-to-day television watching.

Standard-definition pictures are crisply defined and noiseless, a reflection of the Sony’s efficient Bravia Engine 3 scaling and image enhancement, while Freeview HD is better still. Colour consistency is first-rate, solid blocks of background are stable and edge-definition is as remarkable as it ought to be.

Predictably, it’s Blu-ray that most flatters the Sony. Motion is entirely stable, even with the steady horizontal camera pans that can frequently give rival sets palpitations.

Colours are properly saturated without being overblown, subtle details are unerringly highlighted and, if some dark areas recede into solid blocks of black rather than reveal their full array of textures, that’s probably par for the course at this price.

Heck, the Sony even sounds good, with a composed treble and a fullness of tone that entirely eludes many of its rivals.

Online and 3D? Online content varies in quality, of course, with the iPlayer and Sony’s Qriocity platforms giving the best results.

Shift to LoveFilm, and more pixellation becomes apparent with some older movies, but it’s never enough to intrude unduly. In our room, with our wireless router within sight of the set, the wi-fi streaming worked fine too.

Competent 3D performance
As for 3D – well, some crosstalk and stability issues can crop up from time to time, especially with faster-moving images, but as we’ve said before, at this stage it’s hard to discern whether it’s the set or the content at fault.

In general, and especially with a well-sorted Blu-ray disc such as Avatar or a good game such as Gran Turismo 5, the Sony’s engaging enough.

And that’s a sentiment that neatly summarises the KDL-40NX713 as a whole. It’s nothing revolutionary – in fact, in some senses, it’s old before its time.

But it works very well indeed, it’s good to look at and it’s not too expensive. And that’s enough to earn it our respect.