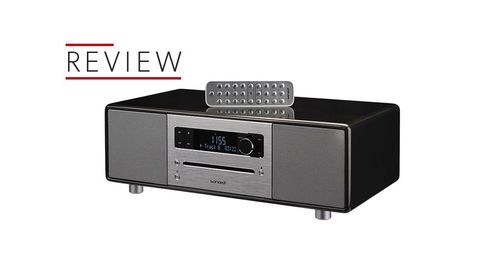 A good, honest, no-nonsense all-in-one music player at a fair price. If it suits your needs, it's well worth checking out

The original sonoroSTEREO (the upper/lower case combo being the German company’s preferred styling) gained a respectable four-star review when we reviewed it a couple of years ago.

On paper, the Stereo 2 doesn’t seem too different from the original. The specification is pretty much identical, and the speaker layout inside the unit is the same. Why, then, the ‘2’?

Well, along with a couple of extra strings to the unit’s bow, Sonoro claims also to have tweaked the sound of the Stereo 2 a touch.

One thing Sonoro is keen on is “wellness”. The first Stereo promoted "wellness" by providing soothing sounds of whalesong, rain, waves and so on.

This version 2 takes all that, including the birdsong and the soothing voices that guide you through relaxation exercises, and adds a neat little extra.

For £30, you can add a Bluetooth plug adapter into which you can connect a lamp, and via which the Stereo 2 can control a dimmable bulb. The lighting in your room can then be controlled by the unit.

Working in tandem with the wellness sounds and relaxation course, it’s potentially an effective way of calming down after all the stresses of the day.

The light can also be used in conjunction with the unit’s alarm function – so you can wake to a gradually brightening room if you so choose.

Let’s rewind a bit, though. The Stereo 2 is a solid, no-nonsense piece of kit that does what it does really rather well.

In today’s age of streaming this and internet that, it’s perhaps a little bit of a throw-back, but for a great many people it will meet their music and radio requirements perfectly.

CD, radio (DAB/DAB+ and FM) and Bluetooth capabilities are complemented at the back of the unit by a pair of RCA phono inputs, a 3.5mm input, headphone output and a USB socket for MP3 and WMA playback.

It omits internet radio and access to a local network – but for some that simply won’t be an issue.

The Stereo 2, available in four finishes, looks like the sort of thing you might find in an upmarket hotel room – and indeed Sonoro sells many units into that industry.

One advantage for the user is all functionality is accessible via the unit itself, and not only via the remote control. (It’s amazing what goes missing from even the poshest hotel rooms – so it’s a requirement for Sonoro kit to work without recourse to the remote.)

Having admired the build and finish of the Stereo 2, we slot in a CD to see what, if anything, has changed sonically from the original. The core characteristics remain intact – and that’s a good thing.

This Sonoro provides an improbably big sound from such a relatively diminutive box. The two 8cm drivers – one either side of the display and CD slot – work well with the downward-firing 10cm subwoofer.

This is a mature sound, tuned to suit as wide a range of environments as possible. Tonally balanced and nicely detailed, it’s generally a comfortable listen.

It can go impressively loud as well – although with that volume comes a touch of upper-range stridency. It doesn’t quite tip over into the realms of shrill, but it does threaten to.

Admittedly that's at volume levels we wouldn’t be deploying in normal circumstances – and for parties it shouldn't be an issue, what with all the bodies in the room likely to soak up much of that latent stridency.

The bass is clean, and precise for the most part, and integrates smoothly with the midrange and upper registers. With the deepest bass, though, it is a little fatter and more vague than we recall in the original Stereo.

It’s certainly nothing to worry unduly about - just evidence, perhaps, of those claimed sonic tweaks.

The tonal character is basically the same for all inputs, whether we’re listening via headphones, CD or streaming via Bluetooth.

A CD-quality stream of Going Home by Leonard Cohen successfully manages to get across the emotion of the song – we are certainly listening to the music, rather than having it on as background entertainment.

A standard Spotify stream of Öngyikos Vasárnap by Venetian Snares, on the other hand, comes across less impressively – which is what we would expect, as it’s a considerably lower resolution format.

The Sonoro Stereo 2 continues where the original Stereo left off. It does its job well, without fuss – and adds some neat tricks and abilities that will delight those who are interested in them.

It doesn’t do everything – it doesn't claim to – but it will suit a segment of the market extremely well.

See all our Sonoro reviews