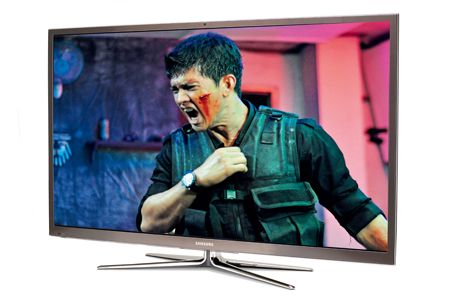 A future TV that’s ready now, this is as smart as smart TV gets

As you’ll have noticed from our other Samsung TV reviews, it’s hard to argue with the idea that the company is out in front when it comes to pushing innovation in the television market.

Quick to move its focus from 3D to everything smart TV, the company’s focus this year is smart content, smart interaction and smart evolution. If you want a big screen to wow your friends, this – the Samsung PS64E8000 – is the one.

Samsung calls this design a "titan black premium finish and luxurious quad stand", which sounds pretty fancy – and, well, it looks it too, thanks to the "metal crystal design".

The stand has some swivel in it too. At just 48mm deep, it's a slip of a 64in TV, the slimline profile of which is exaggerated by the sheer size of the screen.

That said, Samsung's claim that this telly is as much as 50 per cent thinner than comparable TVs doesn't seem to quite stack up when you compare it to recent rivals.

However, there's much more to this TV than just good looks. It's smart too. Samsung was quick to make the Smart Hub not only a home screen for your internet and on-demand content, but a screen from which you could access all of your TV’s features and functions.

And after a few niggles with BBC iPlayer, the amount of content you’ll find here is now as good as anything you'll find anywhere else. And, for the most part, it's better – apps from BBC iPlayer and BBC Sport are joined by those for Acetrax, Blinkbox, LoveFilm, Netflix and YouTube, plus social media for Facebook and Twitter.

And there’s more: smart interaction is all about how you control your TV. Of course, you always have the standard remote control but here it’s joined by a smaller, snazzier sibling which allows you to access gesture and voice controls for the television, and incorporate face recognition into your TV experience.

There's nothing too exciting about the longer stick, it has to be said. There’s a hexagonal, multi-coloured button that takes you to Samsung’s Smart Hub, which is handy, and some shortcut buttons to other key controls such as 3D, source input and more.

More fun and – at times – more useful is to use the smaller remote. This has an integrated microphone and it’s where you aim voice commands. It’s a little erratic, so you might find the touchpad, which can be used to scroll cursor-style around the web browser and on-screen keyboard, more effective.

Of course, thanks to the gesture controls, you could do away with

the remotes altogether and use face recognition to log in to accounts – such as the Samsung apps store or your Netflix account – and then use a series of careful hand movements aimed at the camera in the screen.

Last but not least there’s smart evolution, a removable module at the back of the set that promises to ensure this TV doesn’t become outdated and can instead be upgraded as new tech comes to Samsung sets.

Whether it's upgrading your TV’s processor or updating the smart TV portal, as Samsung suggests, the kit should ensure you’re never left behind.

And if the pace of TV-tech development continues at its current rate, that's a major plus. The overall smartness of this set certainly gets a full thumbs-up from us.

As befits such a future-thinking plasma TV, the things that other TVs might shout about, this PS64E8000 sees as standard.

It is, of course, 3D, with two pairs of active-shutter glasses included. There's also integrated wi-fi and DLNA support, three HDMI and three USB inputs, and the option of connecting an external HDD and using it as a basic PVR.

Thankfully, the picture is pretty handy, too. Colours are bright and bold, and there’s a good level of detail in off-air broadcasts plus, naturally, a leap in quality when it comes to HD channels.

It’s a similar story with movie content. This plasma can’t quite match the depth and solidity of the black levels of Panasonic’s (dark scenes are slightly uniform) but by contrast it’s exceptionally clean and sharp.

Whites are bright, and the overall colour balance is nicely balanced. Fast motion isn’t faultless, but it shouldn’t cause any annoyance to the average user.

For the record, and for the umpteenth time, we’re underwhelmed by the sound – this is an expensive TV, but it doesn't sound it. Thankfully, quite how clever it is makes up for it.

The picture is a smidge off the pace of the best in some areas, but if you're looking for the ultimate in design, features and future-proof cleverness in your TV, then it’s hard to recommend looking elsewhere.