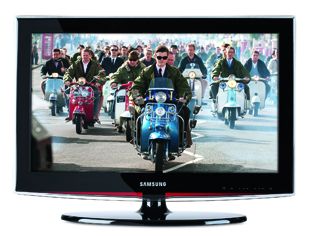 Lots of performance positives make this an interesting ‘budget’ option

The ‘D’ in the model number indicates a 2011 product, but the elegant, minimal design of Samsung’s larger 2011 TVs evidently hasn’t trickled down to the smaller screen sizes just yet.

The 26D450 is a good-looking device, but the ‘rose black’ finish, on-screen menus and unwieldy remote control are reminiscent of Samsung’s state of the art circa 2008.

This, plus the relative depth (8cm) of its chassis and chunky bezel, makes the 26D450 seem less than cutting edge. But then, nor is it priced at the cutting edge.

Decent spec for the screen size
Specification is on the money, though (a 1366 x 768 resolution and twin TV tuners are the norm in this sector) and the D450’s as simple to set up as the best of Samsung’s big-screen efforts.

With a Blu-ray copy of The Lincoln Lawyer to downscale, the D450 delivers vivid, punchy, high-contrast images – motion is handled with assurance most of the time, with only rapid or complicated motion causing any uncertainty.

The Samsung’s not immune to picture noise in extremis, though, and there’s a rather solid quality to the (deep, lustrous) black tones that spoils the otherwise impressive detail levels.

TV reception, whether via analogue or digital tuner, is reasonably composed – critically, the D450 manages to keep a decent grip on movement, minimising the impact of its otherwise bothersome jagged edges and shortage of fine detail.

Coarse textures and sound
Its areas of expertise (strong contrasts, vibrant colours) remain to the fore, and that’s also the case when upscaling DVDs. Edges are smooth from TV broadcasts, though picture noise remains intrusive and textures rather coarse.

‘Coarse’ is the ideal word to describe the Samsung’s sound. But, at least we’re not adding ‘thin’ and ‘shouty’: by the standards of this group, the D450 fights off the spectre of sibilance pretty well.

The Samsung is a good buy at the money. But if you can spend more, there’s the alluringly feature-laden Sony KDL-26EX320.