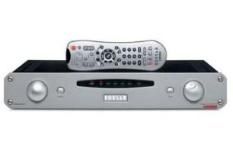 Despite a £450 price rise, the Roksan remains among the best in class

Roksan's a company that's constantly tinkering with its products. That's not actually a bad thing – despite having been around for longer than most of us care to remember, the Caspian's frequent upgrades have seen it consistently appear at the top of its class.

In fact, it ran away with a What Hi-Fi? Sound and Vision Award just last year. Unfortunately, it's gone up from £1000 to £1450 since then, and that's a significant price-hike.

Still, putting that aside for a moment in the name of musical enjoyment, we slot the soundtrack to Moon into our reference CD player, where it becomes clear why we've been so keen to praise the Caspian in the past.

Opening track Welcome to Lunar Industries benefits from some excellent dynamic grip, allowing the synthesised undercurrent to build menacingly, while the piano is given centre stage in a brilliantly multi-layered stereo image.

When the drums kick in, the Roksan affords them the punch they deserve, and the whole presentation is rounded out by the kind of deep-in-the-belly bass that the Naim just can't quite achieve.

Turn up that volume dial
Rock fans will be pleased, too. Crank the volume up while playing The Mars Volta's Teflon and the Caspian responds with tight, chunky bass, vicious drums that start and stop precisely, and enough overall control to make sense of the track's chaotic mess of extra effects.

Switch to the likeable rom-pop of Jack Penate's Pull My Heart Away, and the amp proves that although it lacks the outright insight of the Cyrus 8 XP, it's got enough detail to reveal the heartache of the lead vocal.

Once again we're also left impressed with the way the soundstage is constructed, with the layering of instruments and choral backing serving to enhance, rather than drown, the central performance.

All very positive, but there is a problem. To achieve the performance described above the volume levels need to be rather high. At lower volumes there's a lack of bite and dynamics, and this leaves the delivery sounding rather, well, dull.

Push it hard and the Caspian suddenly comes to life, but not everyone's going to be able to live with that approach, especially given the exceptional performance of the Cyrus 8 XP, which comes in at £200 less.