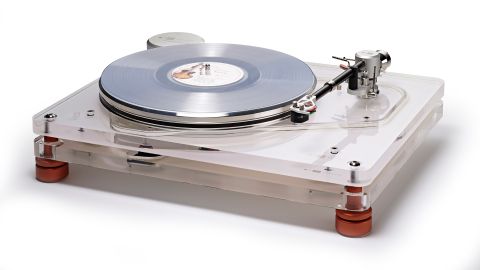 Vertere Acoustics is a hard company to define. It was founded around a decade ago and focused on some quite extravagantly designed high-end cables. That range has since expanded to cover most price points, but in 2013 the company took what looked to be a left turn by producing a statement record player.

Making a high-end turntable may not seem the most logical of steps for a cable company, but Vertere has stuck at it, slowly increasing its range of vinyl-related products to include other decks, arms, a cartridge and supports, not forgetting own-brand records too.

That first deck, the mighty RG-1, still tops the turntable range. With the partnering tonearm and reference power supply, the package price edges close to six figures. With a limited market for record players costing that much, it comes as no surprise that the later decks are all more affordable, although that’s very much in relative terms.

The MG-1 MkII is just the second step-up in Vertere’s four-strong turntable family, though once arm and cartridge are included it still sits firmly in the high-end sector of the market.

But don’t write-off Vertere as a cable company just dabbling in turntables. The mastermind behind the company is none other than Touraj Moghaddam, founder of Roksan and designer of the long-running, innovative and rather brilliant Xerxes and TMS turntables.

With around 35 years worth of turntable design experience coming into play, it comes as no surprise to find that the MG-1 MkII package comes across as a fully polished product.

You don’t have to look that hard to find engineering similarities between those earlier classic designs and the MG-1, but equally, the design of this deck, and the partnering SG-1 MkII tonearm, are clearly products of fresh thinking that takes advantage of the latest engineering methods and materials.

At the heart of the turntable’s structure is a triple-layered acrylic construction that uses precisely tuned rubber isolation mounts to control and filter the flow of vibrations within the deck.

There are so many interesting details here from a motor body that’s free to rotate, so that belt tension remains constant (so helping speed stability), to a removable centre spindle on the platter that stops noise from the bearing being directly transmitted to the record surface.

Even apparently standard items such as the platter are designed with a twist. In this case with most of the mass concentrated on the outside edge to maximise inertia without adding unwanted weight, so helping speed stability (again). The addition of that unwanted platter mass would need a different, more compromised main bearing design to cope, and so would degrade performance.

The platter doesn’t use a conventional mat either; rather Vertere has bonded a thin 3mm layer of acrylic to the aluminium alloy platter to make contact with the record. This combination is chosen to provide good support for the vinyl.

The power supply unit that drives the motor is housed in a separate, outboard box. This controls the playing speed too, and changing from 33.3 to 45rpm needs just a flick of a switch. It’s a neat enough box but looks a little basic next to the look-at-me appearance of the main deck.

The SG-1 Mk II tonearm is just as interesting as the partnering turntable. Its bearing is essentially a variant of a unipivot design where the arm balances on a single point, but here Vertere has gone its own way by sitting the point between three precision ball bearings rather than it sitting on a flat pad. The idea is to locate the point with more precision rather than give it a chance to skate around (on a microscopic level, of course).

As well as the low-slung tracking weight on the back, the SG-1 also features a sliding weight on its carbon fibre armtube. This secondary weight, when balanced against the main one, is intended to optimise the arm’s moving mass for the cartridge fitted. We’re talking subtle changes here, but it helps to fine-tune the overall performance.

This is the kind of adjustment can be left to the supplying dealer, but there’s no harm in playing around with it and noticing the differences in performance as both weights are adjusted.

The newest member of this package is Vertere’s first in-house cartridge, the Mystic. This 9.1g moving coil is arguably the most conventional design of the trio of components but still has a rigid aluminium body that’s machined from solid. Its top plate isn’t flat as is the norm but has three small raised sections that ensure a stable fit with the tonearm, even if the headshell isn’t machined perfectly flat. The body is carefully designed to work well with the internal generator providing good support and control of unwanted mechanical vibrations.

The Mystic’s body uses an aluminium tube cantilever and a micro elliptical stylus that’s claimed to track the record groove well without suffering from excessive surface noise or compromising on high-frequency response. An output of 0.5mV is healthy enough and shouldn’t cause any gain issues with sensibly designed partnering phono stages.

The cartridge tracks well at the recommended 2.0g and is easy to fit thanks to threaded bolt holes in its body and flattened front and sides that help with alignment.

Not everyone will like the MG-1’s extrovert appearance, but there’s no denying the excellent quality of engineering and build, which is well up to the standards we expect for this kind of price. If the fully transparent look doesn’t appeal, the deck also comes in three premium finishes – metallic black, pearlescent white and champagne – for an extra £500.

While this Vertere isn’t particular hard to get working there’s enough in the way of subtle adjustments, particularly for the arm, for us to suggest that most people should leave it to the dealer.

The deck isn’t unusually fussy about positioning, but the standard turntable rule of giving it a level, low resonance platform that’s preferably as far from the speakers as possible still applies. A suitably talented system is essential too, and definitely don’t skimp on the phono stage.

We used Vertere’s Phono-1 for much of this review alongside our usual Cyrus Phono Signature/PSX-R2 combination. The rest of the set-up is our reference Burmester 088/911 Mk III pre/power and ATC’s SCM 50 speakers.

The initials MG stand for Magic Groove, which sounds a bit over the top until you start listening. It doesn’t take long to realise that Vertere has delivered something special for the money.

We start by listening to Beethoven’s Fifth Symphony and are blown over by the dynamic expression on offer. The music sounds packed with energy and drive, each new crescendo hitting hard.

There’s just so much information on offer, with the deck giving the impression of being able to uncover every detail in the record groove. All that insight is delivered in a coherent and organised way. It never sounds anything less than composed no matter how complex the music gets.

We’re struck by just how well the Vertere captures the interplay between the instruments, making the piece even more enjoyable than we’re used to.

It’s an agile presentation, one that gains authority through stability and control. We can’t recall a similarly priced alternative that sounds as precise or as articulate. Notes stop and start in an instant with minimal overhang. This agility may actually make the MG-1 sound a little lightweight compared to some, but listen carefully and you’ll find there’s no lack of substance here.

The package’s stereo imaging is excellent. It’s expansive and impressively focused. There’s a lovely sense of depth on this recording, with the orchestra layered with care. Instruments stay firmly locked in position no matter how complex the music gets and it’s all done with a confidence that’s hard to better anywhere near this price.

Those looking for that stereotypical soft and warm vinyl sound would do better elsewhere. This Vertere package sounds open and transparent, forgoing any sign of excess richness for a hard-hitting presentation that sounds unusually natural to us. This isn’t a deck that tries to flavour the sound of a record to sound more appealing. It’s a neutral and highly analytical performer that’s honest to the recording, warts and all. And that’s just fine with us.

We switch to Catch A Fire from Bob Marley And The Wailers and love the way this record player delivers bass. Rarely do we hear such articulate and textured bass from vinyl, regardless of price, and particularly when it’s combined with such authority and punch.

The story is equally positive higher up the frequency range with Marley’s voice oozing passion. It sounds natural and fluid with all dynamic nuances intact. It’s easy to close our eyes and imagine the group playing just for us. The player’s ability to latch onto rhythm tracks in such a surefooted manner is deeply impressive.

The MG-1 MkII package is an exceptional performer even at its elevated price level. Once properly set up, it is fuss-free to use and is obviously built to a high standard. Most of all it renders sound with a combination of precision, agility and dynamic dexterity that we haven’t heard bettered by any rival near this price.

Recommended? Without a doubt.